It is in this way that we must train ourselves, by liberation of the self through love.

We will develop love, we will practice it, we will make it both a way and a

basis, take our stand upon it, store it up and thoroughly set it going.

The answer, my friend, is blowin’ in the wind.

The answer is blowin’ in the wind.

Once upon a long time ago, driving home from a ski trip in the Sierra Mountains in 1983, vipassana teacher Joseph Goldstein had an idea. Even though he is rumored to have the ability to ignore his thoughts, Joseph found this idea intriguing and wholesome, and decided to pursue it. He suggested to Wes Nisker that Wes start a journal that would serve the growing Theravadan community in the West while exploring the path of dharma as it made its way through the new frontier.

Wes was in between jobs as a news commentator for rock-and-roll radio stations, so he accepted the challenge and asked Barbara Gates, a dear friend, writer and literature teacher, to join him. After a while, we [Barbara and Wes] realized that neither of us was any good at business, so we enlisted Alan Novidor to become the publisher. We had no idea how Inquiring Mind would develop and flourish.

Over the past thirty-one years, we at the Mind have been sending out journals to a wide community, offering words and images carrying the spirit of the Buddha, the breath of freedom and love. Having sat in conversation with wonderful Buddhist teachers—mostly Theravadan, but also Zen and Tibetan—along with innovative scientists, poets and artists, we’ve tried to make sense of the world and to make the way easier for all. We’ve sent interviews, stories, art and poetry across cities, plains and mountains, and even across oceans. One of the editors happened on a copy of Inquiring Mind in India, at the Happy Café in Bodhgaya, no less.

To remember and honor what it is we’ve offered to the community, we editors decided to review what we’ve been sending out. We foraged in the storage locker and gathered copies of every single issue of the Mind. We each took home a full set, a hefty pile of yellowing newsprint journals, edges frayed, paper fragile, often cracked and torn. Beginning with the first, lean edition from 1984, we each sat down and began to read them through. It took weeks.

As we read, we were by turns surprised, touched, saddened, inspired, disturbed and heartened. Had we really published all this material? We tracked the repeating themes, the letters of protest and debate; we followed the development of the journal as it coevolved with the burgeoning vipassana movement, cross-fertilizing with Zen and Tibetan Buddhism in the West.

We were filled with gratitude for the visionary teachers and artists we were privileged to meet, interview, edit and publish. How we have loved this work! So many delightful memories came up—Barbara interviewing Tsultrim Allione [via Skype] surrounded by Himalayan peaks between eastern China and Tibet, and recording conversations with Ruth Denison while soaking with her in the hot tub at Berkeley’s Claremont Hotel. And Wes throwing the I Ching with John Cage to help write a passage in the piece Cage was composing, or attempting to interview Advaita master Hari Lal Punja, who kept replying, “Who’s asking this question?”

After a Special Issue on the Arts in 1986, in each issue we’ve focused on one theme to explore in depth and nuance. Psychotherapy and Meditation, Death and Serving the Dying, Traditional Dharma, Buddhist as Revolutionary. . . . Issue by issue, we’ve explored juicy topics through interviews, memoir and art, with regular sutta offerings from monks and nuns, and always with poems in our centerfold. Arts, stories and poetry have been favorites for both of us founding editors—descendants of the Beats, as we are. And as might be expected in a Buddhist rag, the three poisons—greed, hatred and delusion—and the three fundamental characteristics of existence—suffering, impermanence and no-self—have been thoroughly dissected and explored.

Meanwhile our themes have coevolved with the turnings and sufferings of the world. In our fall issue in 2001, completed just after 9/11, we posted a quotation on our back cover from visionary Buddhist teacher Joanna Macy: “When we open to the pain of our world, we discover our interconnectedness in the web of life. This is the gift of dark and dangerous times: to feel again our mutual belonging.” With increasing urgency, since 2001, we have taken up the fate of the earth and the systemic expressions of the three poisons. In the last decade, we’ve brought in expert guest editors to help us develop issues on war and peace, power, money, addiction and the Bodhisattva. Three editions have been devoted to the preservation of the earth, the most recent on “hunger” in all of its manifestations.

From the very first issue, Wes has presented readers with the “vast view,” from evolution to astrophysics—DNA and mitochondria, quarks and black holes—while Barbara has dramatized the essential dharma of everyday life—neighbors in West Berkeley, snails in the garden, the death of her beloved dog, friends (lost and found) and family.

As we’ve reviewed these back issues, we’ve been gratified to see how often the Mind has participated in the beginnings of things. In the early 1980s, letters and interviews featured the first all-women’s courses offered at the Insight Meditation Society in New England. In the mid-’80s, articles showcased the founding of Amaravati Buddhist Monastery in England and the developing plans to found a “West Coast meditation center,” which later became Spirit Rock Meditation Center.

In reading back issues, we saw the Mind’s part in bringing Buddhadharma to the West. We did a series of interviews with Vietnamese master Thich Nhat Hanh as he began teaching small retreats in North America. We published essays on the creation of a teachers’ Code of Ethics and initial reflections on the founding of the Interracial Buddhist Council, followed by challenges on the angle and language in our letters column. We featured and celebrated groundbreaking initiations for Theravada nuns and the founding of Western Theravada nunneries. . . .

Inquiring Mind, of course, has been keen on inquiry, and so we have fostered spirited debate. Conversations led to vehement letter exchanges that circled out into the wider Buddhist world (and in recent times, into the blogosphere). In all three decades, dynamic exchanges have graced our pages—on eating meat; on the use of drugs (psychedelics, alcohol, antidepressants); on the morality of the Buddha’s leaving his wife and child to seek wisdom; on the bodhisattva versus (or as a complement to) the arahant; and on the value of dana (generosity) as the means to support teaching of the dharma.

In the early 1990s, some vipassana teachers and advanced students began exploring spiritual traditions that emphasized the inherent nature of enlightenment—Advaita Vedanta, rooted in the Hindu tradition, and the Dzogchen teachings of Vajrayana Buddhism. In our special issue on nondual dharma, some writers contrasted these nondual approaches with a path of gradual awakening often taught in the Theravadan tradition.

This spawned pages of impassioned letters of clarification from Theravadan teachers from both coasts and abroad.

Seventeen years after the furor over our presentation of nondual dharma, we fomented another heated exchange. When Wes playfully described himself as a “firster,” who resonated with the noble truth of suffering, rather than a “thirdster,” focused more on the third truth of the end of suffering, the journal was deluged with letters. This led to a whole edition on Enlightenment—contrasting understandings as well as the value and risks of even taking up a discussion of this taboo subject. In his keynote essay to launch the issue, Jack Kornfield wrote: “Of course there is enlightenment! But the word enlightenment can be used in different ways, and that can be confusing. . . . The Buddha declares, ‘If it were not possible to free the heart from entanglement, I would not teach you to do so.’ Aim for nothing less.”

In recent years, debates over the nature of mindfulness practice and the impact and ethics of teaching secular mindfulness have been presented in our pages. Fierce debate followed our issue on War and Peace, both over the ethics of teaching mindfulness to predeployment soldiers and over whether it is ever appropriate, from the perspective of Buddhist teaching, to use military force.

In presenting seemingly conflicting views, we’ve continued to return to what Joseph Goldstein wrote in a letter to the Mind in Spring 1993: “Freedom and compassion are the reference points for all practice. …The dharma has one taste, the taste of freedom.” That is the underlying message that we have hoped to convey.

In this final issue, we Minders release last words and images. The art we offer is all prayer flags, sending out aspirations. Who knows where these offerings will reach or what they may set in motion as they blow in the wind across continents and through consciousness. 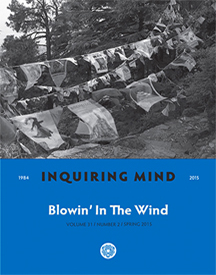 John Bigelow Taylor and Dianne Dubler have produced the photography for over 250 art books. Their website is kubaba.com.

John Bigelow Taylor and Dianne Dubler have produced the photography for over 250 art books. Their website is kubaba.com.