Human beings try to understand what it means to be human by telling stories, by making songs and poems. In the telling and the hearing, we explore what it is to be alive, to love, to lose those we love, to be silly, to have adventures. Stories are made to be told, poems to be shared; they undo our belief in a small separate self.

Storytelling sometimes has a bad name in Buddhist contexts. Teachers say, “Don’t be attached to a false view of yourself! Drop your story. The stories you tell yourself about yourself confine you.”

But Buddhism also makes use of stories. In the story of the “Four Heavenly Messengers,” for example, Prince Siddhartha slips away from the protective confines of his parents’ palace and is shocked to encounter someone sick, someone old, and a corpse. Inspired by meeting the fourth messenger, a holy man, the prince sets off to find the path that brings release from suffering. And Zen Buddhism offers koans, tiny charged stories, open-ended and poetic, that can shock the student into letting go of delusion. These are the stories of our Buddhist family.

And all of us have family stories, whether we are Buddhists or not—how our parents met, or our dogs got lost and found. We pass these stories along from one generation to the next, embellishing them, laughing at ourselves.

SUSAN: Recently I read a story to my six-year-old granddaughter from an album of family tales recorded by my great-grandmother. When her daughter (my great-aunt) was a little girl, she loved sweet potato skins, and she used to hide them behind a cushion of the living room sofa, for later. One day my great-grandmother had a lady friend for tea. “What lovely fabric!” the guest declared, picking up the cushion. And there was a pile of old sweet potato skins! Six generations later, my granddaughter loved this story. Family stories like this satisfy and delight us—reminding us not to take ourselves too ponderously. Even venerable ancestors get into mischief!

BARBARA: My father used to tell a story about playing hide-and-seek when he was a little boy. Behind the rustling dresses in his grandmother’s walk-in closet, he found a sliding panel that revealed a secret chamber. A stairway circled down to the cellar. “This had to be where my great-great-grandparents harbored runaway slaves!” he told us. My brother and sister and I loved to hear, and later to tell, this tale connecting our family to the heroic Underground Railroad.

SUSAN: My grandmother (sister of the potato-skin girl) was sent to a boarding school for proper young ladies. She didn’t want to be a proper young lady and was always getting in trouble. The punishment for misbehavior at that school was to memorize a poem. When I was a child, Grandma would recite Keats or Milton at the drop of a hat. She often told me that being a naughty girl brought her the best part of her whole education—the gift of poetry.

BARBARA: My mother tells a story about her mother, who, as she was dying, read aloud a poem by Edna St. Vincent Millay:

My soul is all but out of me,—let fall
No burning leaf; prithee, let no bird call.

After my grandmother died, I learned this poem by heart; reciting it, I connect with her and feel the ache of love and loss, of shared human fragility.

For this issue of Inquiring Mind, we invited submissions of stories and poems with a “dharmic” perspective. We present this work in three sections, for the Buddha’s “three marks of existence”: suffering, impermanence and no fixed self.

There once was a prince from Lumbini
who instructed yogis and yogini
He taught them all freedom
from clinging to “me-dom”
thus making their suffering teeny.

—Susan Moon and Barbara Gates
(Limerick by the editorial staff) 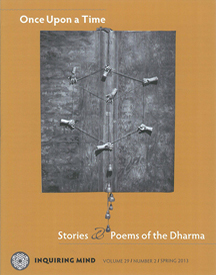