Make Your Body a Sundial

Firewood becomes ash, and it does not become firewood again. Yet, do not suppose that the ash is future and the firewood past.        — Dogen, “Genjokoan”

Buddha says step up to the plate right now, in this very flash of the pan. This is it, kiddo. And yet, in a seeming contradiction, my Zen teachers are always telling me to remember the dusty ancestors of yesteryear. In the Soto Zen tradition in which I practice, we chant the list of our ancestors every chance we get, and when I took vows to keep the Buddhist precepts, I was given my lineage paper, kind of like an American Kennel Club pedigree—ninety-two generations of ancestors who passed the Dharma along, from Buddha down to me.

When I first started practicing thirty-five years ago, this emphasis on lineage rubbed me the wrong way. On my car I sported a bumper sticker saying “Question Authority.” In those days I thought that meant, “Don’t bow to dead Zen teachers.”

But I kept going back to the zendo, and one of the “ancestors” I met there was Eihei Dogen. Chanting his 13th-century words while the incense stick burned down on our 20th-century altar, I saw that Dogen was trying to help me. He didn’t care whether I bowed to him or not.

Zen Master Eihei Dogen was born in Kyoto in 1200, the illegitimate child of a woman of the Japanese imperial court. Dogen’s mother died when he was eight, and it is said that as the orphaned child watched the incense smoke ascending at her funeral service, he experienced the impermanence of all things. He could have grown up to hold a high position at court, but at thirteen, longing to seek the truth, he became a Buddhist monk. Dogen was the founder of the Soto school of Zen in Japan, and he is known for his extensive philosophical and poetic writings.

I live a long way from that orphan boy in 13th-century imperial Japan. I grew up as a middle-class girl in New England, seven and a half centuries later, eight and a half thousand miles away. What a miracle that Dogen’s writings are so central to me and to my explorations of what it means to be a human being. Joanna Macy talks about this too in this issue of the Mind. The Dharma flies past the calendar at the speed of light. Dogen’s teachings from long ago are alive in us in the present.

Every year I celebrate Thanksgiving with the same group of extended family and friends. None of these people are Buddhists, but at some point during the long meal, I make everyone stop talking; I stand up from the table that is laden with turkey and sweet potatoes, and I read to them from Dogen’s Instructions to the Cook. When I first get up to read, my friends and relatives groan affectionately, muttering, “Here comes the lecture about the rice and the eyeball.” But they have come to love Dogen too. They count on it.

I tell them: “Protect the rice of the monastery; it is your eyeball . . . You should prepare food with kind mind. Kind mind is parental mind . . . you should look after water and grain with compassionate care, as though tending your own children.”

And then, to make them laugh, I read, “Do not look into other monks’ bowls, arousing envy . . . Do not throw balls of rice into your mouth.”

My twenty-three-year-old niece Sasha tells me that sometimes, in a restaurant, she finds herself looking over at another customer’s plate and wishing she’d ordered that. Then she says to herself, “Do not look into other monks’ bowls, arousing envy.” So it turns out I’m passing Dogen’s teachings along! I’m in the lineage, and Sasha’s in the lineage too. If the ancestors of the past want to talk to the generations of the present and the future, it is our job to help them do it. We can carry their teachings from another time and place, right to the family table.

Each moment is all being, is the entire world. Reflect now whether any being or any world is left out of the present moment. (“The Time-Being”)

It’s all here, right now, in me and around me, in what Dogen calls “the time-being.” I think of this as vertical time, as opposed to chronological, sequential time. The ancestors are here with me right now and the babies who haven’t been born yet are here now too, already walking and talking.

In the fall of 2011, I spent a day with the Sacred Sites Peace Walk, led by Japanese Buddhists and Native Americans. The walk’s twofold purpose was to honor and protect Native American sacred sites, and to raise awareness about the dangers of nuclear power. These two purposes were braided together as one: honoring the ancestors of the past and taking care of the ancestors to come.

We visited a Native American burial ground near Mission San Jose, where Indian people were buried in unmarked graves. We stood in a circle on the bumpy grass, and a wand of burning sage was passed around the circle for healing. Ohlone leader Corinna Gould told us that they had recently reburied a baby there—a baby 2,000 years old—because its remains had been dug up, along with the remains of other ancestors, to make room for a housing development. I wondered: How could a baby be 2,000 years old? We each made an offering of a pinch of tobacco at the center of the circle, as three young Indians drummed and sang. I thought about the little body going into the ground, and out again, and in again, the little bones coming apart over the years. Our ancestors were babies. Our babies will be ancestors. It’s our job to take care of them.

At this moment in time I see my granddaughter as a five-year-old child, and she sees me as an old woman, an ancestor. She also makes real for me the need to take care of the future—that’s where she will be living (along with all the other children who make it there), and I’m only speaking of the near future. I know her now, and if I’m lucky I’ll know her as a young adult, but I won’t know her when she’s a middle-aged person. That’s a strange feeling. She won’t be very old at all when I die. So she travels far beyond the threshold of my life. She may even have a granddaughter some day, and she won’t know her granddaughter as an old woman either.

My grandmother had a shelf of children’s books that had been hers when she was a child—back in ancient times, as I thought. I loved to turn the dusty pages and look at the children playing with their hoops and tops. The books were so old, and yet, strangely, they were for children who had been as young as me when they read them. I was also fascinated by my grandmother’s old photo albums, in which I saw my father as a child—on horseback, or in a sailor suit. There was magic in looking at him as a boy.

Every once in a while my granddaughter says to me, with amazement, “You’re my dad’s mom!” She’s trying to absorb this amazing truth. It’s a mystery to me too.

In our arrogance we sometimes think that history begins with us, forgetting how our lives depend on the struggles of those who came before. But our predecessors have looked out for us in ways both known and unknown. Not all of them, of course, but thanks are due to the ones who did. What about John Muir and Yosemite, for example? Or the people who wrote the Bill of Rights? What about the people who established Social Security? Or Sojourner Truth, who struggled for me to have the right to vote? If we want to be helpful to the ones who will come after us, let’s show a little gratitude to the ones who came before. How hard is that? We’re links in a beautiful chain. Hey, we’re part of a parade!

In Werner Herzog’s film Cave of Forgotten Dreams I saw the oldest cave paintings yet discovered, dating back 35,000 years. And yet, the horses are still whinnying across the walls of the cave, nostrils flared, eyes wide, timeless, alive. And the Andromeda Galaxy you see tonight in the telescope was doing its dance 300,000 years ago—long, long before the charcoal horses ran. If beings on a distant star are watching us, they will not see the smoke from Fukushima Daiichi for tens of thousands of years.

Here’s another mystery. At the time that I was born, the sun was in the constellation of Scorpio. That’s how the stars lined up in the sky on that date. The brightest star in Scorpio is Antares, 600 light years away. So doesn’t that actually mean that the sun had been in Scorpio 600 years before my birth? The now of my birthday and the now of Scorpio didn’t match. Or to look at it another way, this is further proof that it’s all one big Now. My birth took place in all time. Yours did too.

Stand under the sun and make of your body a sundial. Watch your shadow swing around you. Turn yourself into an hourglass. Let the sand run down your spine. Chronograph, timepiece, keeper of the calendar. You yourself are nothing but time.

When I get away from my appointment book, from busy-ness, when I sit down for a drink of water, beside a stream, in the sun, I feel completely present. I notice the bright red Indian paintbrush beside the stream. I feel the hot rock beneath me. At the same time, I feel how huge the mountains are and how long their lives, how tiny and brief I am. A bright flash in a pan.

Dogen quotes are from Moon in a Dewdrop: Writings of Zen Master Dogen, edited by Kazuaki Tanahashi (North Point Press, 1985). 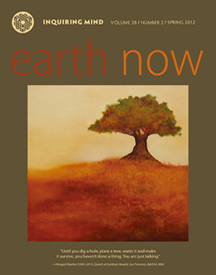 Susan Moon is a writer and a lay dharma teacher in the Soto Zen tradition. She is the author of several books, including This Is Getting Old: Zen Thoughts on Aging with Humor and Dignity (Shambhala, 2010). Her newest book is The Hidden Lamp: Stories from Twenty-Five Centuries of Awakened Women, with co-author Florence Caplow (Wisdom Publications, 2013). Moon was Inquiring Mind's guest editor for three issues: "The God Issue" (Fall 2013), "Once Upon a Time" (Spring 2013) and "Earth Now!" (Spring 2012).

Susan Moon is a writer and a lay dharma teacher in the Soto Zen tradition. She is the author of several books, including This Is Getting Old: Zen Thoughts on Aging with Humor and Dignity (Shambhala, 2010). Her newest book is The Hidden Lamp: Stories from Twenty-Five Centuries of Awakened Women, with co-author Florence Caplow (Wisdom Publications, 2013). Moon was Inquiring Mind's guest editor for three issues: "The God Issue" (Fall 2013), "Once Upon a Time" (Spring 2013) and "Earth Now!" (Spring 2012).