The world suffered mightily this year. Earthquakes, tsunami and nuclear meltdown; revolutions which in some countries brought change, in others provoked the slaughter of those rising up; the many wars bringing with them dislocation, rape and starvation; in our own country, economic recession and the widening gap between rich and poor. All this we have witnessed.

For citizens of our struggling world, Buddhism offers a model of compassionate action, the figure of the bodhisattva. Practicing diligently for her own enlightenment, the bodhisattva vows not to enter into the fully liberated state until she has awakened all other beings in the universe. The embodiment of the quality of compassion, she steps into the world to alleviate the suffering of everyday life, but her ultimate goal is to cure that deeper dis-ease caused by our grasping and clinging. She takes responsibility to awaken all beings to the reality that we are already enlightened.

Some may object, “The bodhisattva comes from the Mahayana tradition, it’s not part of our Theravada path!” But among our contributors we have found a more complex and nuanced view. Bodhisattvas, classical and contemporary, inhabit our world—from the heroic monkeys and deer of early Buddhism’s Jataka tales to those who choose to work in present-day war zones and difficult circumstances, to contemporary manifestations of archetypal bodhisattvas such as Nelson Mandela, Rachel Carson and the Dalai Lama. Encountering these inspirational figures, we tease out the essence of what it means to offer effort and energy for others, and how such commitment and activity can awaken us to our own enlightened nature.

The Bodhisattva and the Arhat: Walking Together Hand-in-Hand
While some contrast the bodhisattva path with that of the arhat, Gil Fronsdal challenges this separation; he walks both paths and shows us how to do the same.

Opening the Heart at Stanford, Google and Beyond
Margaret Cullen describes graduates of Compassion Cultivation: a cancer patient who takes in her suicidal nephew and a retired academic who truly learns to feel for others.

She Who Listens
Patrick McMahon gives us a hard-boiled detective who, in pursuit of the missing bodhisattva, learns that life is not always noir and white.

The Absolute, the Relative and the Colonel
Peace advocate Sarah Weintraub explores her dilemma as an interpreter in war-torn Colombia: struggling to see the humanness of “the Colonel” and his fellow military while doing all she can to stop them from doing harm.

What’s a Medicine Buddha Doing in Thailand?
Dhammananda Bhikkhuni follows her dream to manifest a giant sky-blue embodiment of compassion and healing.

Huge Love
Chenxing Han cares for the dying alongside Beth Goldring, founder of the Brahmavihara/Cambodia AIDS Project, whose workers don’t see themselves as “helpers” but as practitioners.

The Reluctant Bodhisattva
Zen teacher Hozan Alan Senauke faces his own shadow in learning to live and practice the bodhisattva vow.

At the Fool’s Court
Playwright Martha Boesing takes us to the streets of San Francisco, where the Faithful Fools use art, poetry and performance to shatter myths about homelessness.

Interview with Taigen Dan Leighton: A Kind of Performance Art
Dan Leighton evokes the “bodhisattva archetype” and suggests its multitude of manifestations, from Rachel Carson to Cassius Clay.

Liberating Rag: Making Peace Out of War
Grappling with the “urgent fury” of a world at war and the wars in her own mind, Barbara Gates finds inspiration in war-veteran artists and paper makers.

On the Bodhisattva Path, I Stopped Off for a Burger
Does eating meat align with practice of the Dharma? Bob Isaacson and Norm Phelps reference texts and teachings of the Buddha to argue a powerful “No.”

Practice: A Person of Many Parts
Bob Stahl leads us head to toe, through pus, blood, urine and feces, in the 32 Parts of the Body meditation, on a path to freedom.

The Dharma & The Drama
By zooming out, Wes Nisker retools our view of Earth and human beings as the central focus of the universe. In other words, let’s relax and get over ourselves.

At this time, only three articles from the Bodhisattva issue have been archived. If you’d like to help us continue the work of this archive, please consider a tax-deductable donation! 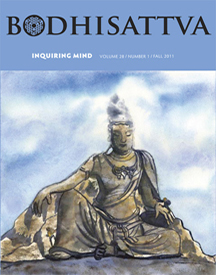