Where the Path Divides: Early Buddhism and the Bodhisattva Ideal

The Pali Nikayas and kindred texts of the same genre are regarded as the most reliable records we have of the original teachings of the Buddha Gotama. Of course since the Buddha himself wrote nothing down, we have no direct access to what he really taught. But the Nikayas and related texts can reasonably be taken to represent the Buddha’s teachings as the ancient Buddhist community understood them and preserved them for posterity. Texts from different early schools (recorded in Pali, Sanskrit, Gandhari and Chinese translation) correspond closely enough to testify to their antiquity. Though they may have been written down only in the first century BCE, they bear the marks of an oral literature transmitted for centuries by word of mouth before being transcribed on palm leaves, bark and paper.

Now these sources consistently hold up arahantship as the culmination of the Buddhist spiritual life. The Buddha says that the purpose of his teaching is the cessation of suffering, and the arahant is the person who has reached the end of suffering. We never find in the early suttas the Buddha explicitly urging his disciples to follow a bodhisattva path. Such texts do not even mention a systematic bodhisattva path as distinct from a path to arahantship. A bodhisattva simply discovers unaided the lost path to nirvana, eradicates all defilements, and then—as a Buddha—teaches the Dharma to the world. His arahant disciples follow the path and attain the goal under his guidance.

In the early discourses, the Buddha uses the word bodhisatta (in Pali) to refer to himself before his enlightenment, extending its application back to his immediately preceding life in the Tusita heaven. But he does not speak of a “bodhisattva career” as something he consciously pursued over many eons. Explicit formulations of a bodhisattva path first emerge in works that date roughly from the second century BCE, particularly the Jatakas, the stories of the Buddha’s past lives. These initial accounts of the bodhisattva’s altruistic deeds, however, serve more to extol the achievements of the bodhisattva than to establish a paradigm for others to emulate. Their purpose is not to prescribe the bodhisattva path but to arouse devotion to the Buddha as the one who toiled selflessly to find the way to liberation for mere mortals like ourselves. The Mahayana sutras, which do advocate the bodhisattva ideal, began to appear starting in the first century BCE, three or more centuries after the Buddha’s passing. Though this is roughly the time when the Pali suttas were written down, it is clear from internal evidence that the Mahayana sutras were literary documents from the start, products of an age when writing had become commonplace.

Nevertheless, methodical reflection brings to light a perplexing problem in hermeneutics. The archaic suttas unequivocally indicate that the Buddha surpasses even the greatest of the arahant disciples in spiritual stature. While the arahants have achieved their own liberation, the Buddha makes release from suffering available to others. He is “the best of beings,” “the unsurpassed trainer of persons to be tamed,” “teacher of gods and humans,” “the one person born into this world for the good, welfare and happiness of the world.” He possesses types of knowledge and spiritual powers that equip him to discover and reveal the excellent path to enlightenment. Moreover, the ancient texts refer repeatedly to a plurality of buddhas. They mention six buddhas preceding Gotama, and a Buddha named Metteyya who will succeed him in the distant future. This shows that in cosmic terms, Gotama, the Sakyan Sage, was not unique but one in a beginningless and endless “dynasty” of buddhas, each of whom discovers the Dharma and makes it known to the world.

When we view synoptically the supremacy of the buddhas in the spiritual domain, their distinctive function of liberating others, the repetition of the attainment of buddhahood over cosmic time, and the principle that our destiny is the consequence of our past deeds, we can discern the outlines of a bodhisattva career implicit in the historical Buddha’s own teaching. It thus seems almost inevitable that there would have been people who met him and were so awed by his personality that they formed a wish to attain supreme buddhahood in the future. These would have been incipient bodhisattvas contemporary with the Buddha.

But if this were the case, wouldn’t such persons have approached the Buddha and requested guidance appropriate to their aspiration? In the Nikayas we often see monks approach the Buddha and ask for advice on how to attain arahantship. So it seems reasonable to suppose that those who aspired to Buddhahood would have done the same and that the Buddha would have responded in a fitting way. The question then arises why we don’t find even a trace of teachings on the bodhisattva path in the archaic texts. If there is a causal background to the realization of enlightenment as a buddha rather than as an arahant, why are the Nikayas silent about it? Why don’t they point to the possibility of buddhahood itself as an object of aspiration? Why do they include no description of a bodhisattva career?

While no suttas dealing with these questions are preserved in the textual collections that have come down to us, the very absence of such discourses remains a puzzle that hangs tauntingly before the face of serious Buddhist reflection—a puzzle, alas, that may never be solved. The best we can do is to propose hypotheses, not definitive explanations. It may have been that a compelling need for consistency and compactness in the Dharma required that types of spiritual experience that tested those criteria too severely be excluded. The Buddha’s teachings consistently show the entire practice to converge on arahantship. No matter how the practice might be formulated—whether as the Triple Training, the Noble Eightfold Path, the Four Foundations of Mindfulness, or the Seven Factors of Enlightenment—it always culminates in the taintless liberation of the mind and release from the cycle of rebirths.

Yet the archaic suttas also indicate that the Buddha himself was not simply an arahant. He did more than attain the ultimate goal of his own teaching and thus resists being fully explicable within its framework. Perhaps, by adopting consistency as his standard, he deliberately wanted to avoid introducing any possible competitor in the form of a bodhisattva ideal. In that case, his teaching may be like a mathematical system that achieves consistency and coherence by presupposing certain axioms, the truth of which can never be demonstrated within the system itself. In the case of the Buddha’s teaching, the axiomatic starting point is the fact of buddhahood, which can be incorporated in the system only partly, insofar as buddhahood includes arahantship as one of its dimensions, but not in its entirety, for it also implies dimensions of spiritual perfection not fully represented by the arahant.

Or it may be that one of the above premises is simply wrong. Perhaps the special attributes the texts ascribe to the Buddha are products of a later period. Perhaps the idea of a multiplicity of buddhas, though mentioned in the archaic suttas, is a later interpolation. Maybe the supposition that there must be a distinct course culminating in buddhahood is unwarranted. Or maybe the texts were filtered to exclude mention of a bodhisattva path. We can never know any of this with certainty.

What we can know is that the Buddha impressed his immediate followers, and the early generations of Buddhists, as a most extraordinary being who towered far above his contemporaries. The differential that appeared between an arahant as a fully realized being and a buddha as the one who makes full realization possible for others opened up a field for speculation and spiritual exploration. In the centuries following the Buddha’s demise, attempts to cross this field would see a new spiritual hero break in upon the Buddhist scene, the bodhisattva or aspirant to future buddhahood. This figure not only inspired a new Buddhist movement, the Mahayana, but also made inroads into the older schools, so that early schools like the Theravada eventually came to recognize alternative roads to the final goal: the disciple’s road to arahantship and the bodhisattva’s road to buddhahood. It is this polarity that governs the forms of Buddhism that have come down to us today, both across traditions and within each major tradition. 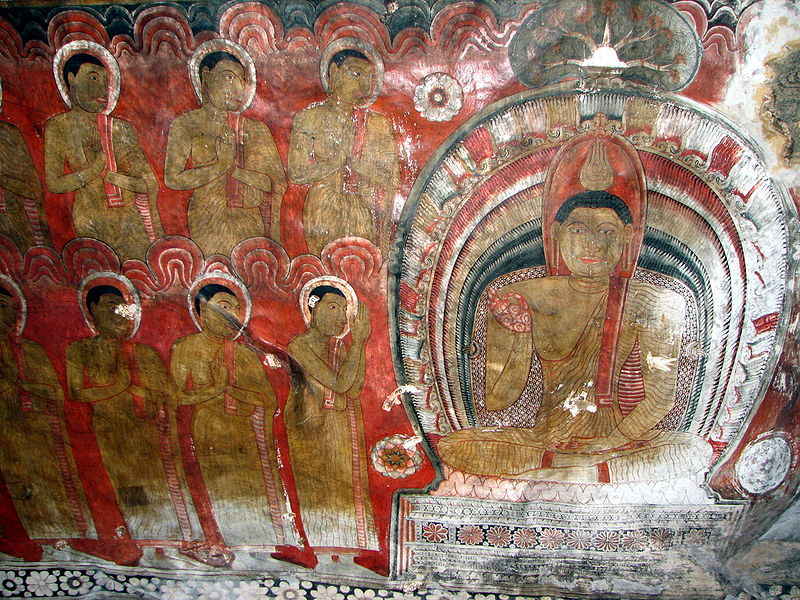