Going to the Zendo & We’re Gonna Get Married

For the first eight years of my life, my parents lived and worked in a Zen community in rural New Hampshire. These roots eventually led me to study Buddhism in graduate school in my early twenties. Half the world away in Korea, a sixteen-year-old boy who would become my husband ordained as a Zen monk and later resolved that he would travel to America for further study in Buddhism. Thus we met, both as students in a class on Buddhism in America. Since Ilmee was from a celibate order, we really were not supposed to fall in love. I did my best to crush any feelings I had for him, but one evening, some time after we met, he told me out of the blue that he had thought about getting married and having a family with me. Over the next few years, we confirmed our initial impression that we were a good match. Ilmee wrote to his master in Korea and asked for permission to marry. His master was rightly upset about it, but the temple’s secretary convinced him that it was possible to be a Buddhist leader and be married—and that in this day and age such figures were needed.

Just what kind of wedding would be appropriate for a Westerner and an Asian, for a Theravadin and a Zen practitioner, for a layperson and an ordained person? I looked into one way of performing a traditional Asian Buddhist wedding. It seemed to revolve around bowing to ancestors in all directions, but I wasn’t raised with the concept of ancestors or the imagery of ten directions. The more I thought about it, the more I wanted a ceremony in the Western format, with the aisle, the vows, the ring, the kiss—what both of us had seen in movies all our lives. We used this Western form, with Buddhist content. For example, we began with a thunderous ringing of the gong, took refuge in the Triple Gem, committed to the Five Precepts, and did a metta meditation.

We got married on a Saturday morning in mid-October at a rural Dharma center. The autumn leaves glowed in the sunlight. The night before, I had arranged the altar and, in honor of the Korean style, offered fruits for the spirits, even though I wasn’t sure there were any spirits hanging around. The Americans thought it was hilarious to see a striped watermelon, like a dinosaur egg, at the knee of the Buddha statue. A married Dharma teacher served as our minister, guiding the ceremony throughout.

We were blessed by the presence of about eighty of our closest friends. Foremost, we were honored that Ilmee’s master, Simong Sunim, had decided to come to America for the first time for the ceremony. He had said in the past that he didn’t like the United States because he thought everyone owned guns and he resented U.S. involvement in South Korea. Now, during his visit, he was completely delighted by the sincerity and kindness of the Western Buddhists he met. At one point, several of us were sipping coffee, sitting in a circle: the master, Ilmee and I, two ex-monks of Chinese heritage, my yoga-vipassana ex-boyfriend, and my dad’s gay cousin. The conversation unfolded into a heated Dharma debate over whether enlightenment was sudden or gradual. Because Korean lay Buddhists rarely engage the tradition in this way, Ilmee’s master beamed with delight.

In the early morning of our wedding day, I discovered that even Buddhists can become Bridezillas. In our quiet apartment, I was getting into my gown with my sister and one other friend. My soon-to-be-husband’s father’s girlfriend burst in, declaring that she needed help getting ready. She needed help? My veneer of pseudo-calm came unglued, and through a tight smile I hissed something along the lines of “Get out.” Somehow the translator, in retrospect using better judgment, bungled the message, and my father-in-law’s girlfriend ended up spreading herself out in the middle of my living room floor, while another older Korean stroked her hair into a traditional Korean updo. Breathe deeply, I told myself!

By 10 a.m., everyone was gathered in their seats in the Dharma hall, and Ilmee was waiting at the altar. My brother Kai, looking paternal, let me take his arm as the music started. But why on earth did I think I had to be so serious coming down the aisle? In truth, I wanted to break into a huge smile. Oh-my-god, everyone-I-love-is-here-in-one-place and oh-my-god-this-is-my-freakin’-wedding! But did I allow even a hint of happiness? No! Instead, I naively tried to look as serious and calm as possible and avoided eye contact by looking at the floor to the point of not even knowing where I was on my way to the altar. Even now I can’t bear to look at pictures of myself at this part of the ceremony. Let this serve as a caution to future brides to be natural and allow joy into all parts of the wedding ceremony.

The ceremony itself went off beautifully, but about twenty minutes in, I was so hot I began sweating; apparently, layers of silk in a traditional Korean hanbok are quite toasty. Unfortunately for me, the ceremony was an hour long, and by the end my legs were getting rather trembly. Next lifetime, my ceremony will be shorter. The other thing that I will change is chanting the Heart Sutra. Stupidly, I thought this sutra was, you know, about the heart. But no: “heart” refers to how this particular piece of scripture is the core, or essence, of the Perfection of Wisdom sutras, which can run up to 100,000 slokas long. So, as we were chanting “no eyes, no ears, no nose, no tongue,” I was thinking that my eighty-plus-year-old Methodist grandmother must be imagining some incredibly gruesome, dismembered body. Another note for next lifetime: use the Mangala Sutta, which details thirty-eight blessings, or guidelines for life.

By far the sweetest moment of the ceremony came entirely by accident. The warmth of the Dharma hall had stirred the formerly cold and inert wasp population back to life, and some were lazily swooping down here and there. A very large black wasp landed on the sleeve of my gown, and without thinking I made a little gasp. It was unthinkable to kill it, since we had just taken the precept of nonharming and were in a Dharma hall to boot. Ilmee, hearing my gasp, instantly looked over and using the stiff sleeve of one arm gently brushed the wasp onto his other sleeve. The hall was silent, with all eyes on the wasp. It stayed a moment and then flew up to the beams. Ilmee’s spontaneous sacrifice on behalf of my welfare said the most about the quality of the being with whom I was now privileged to share this precious life. 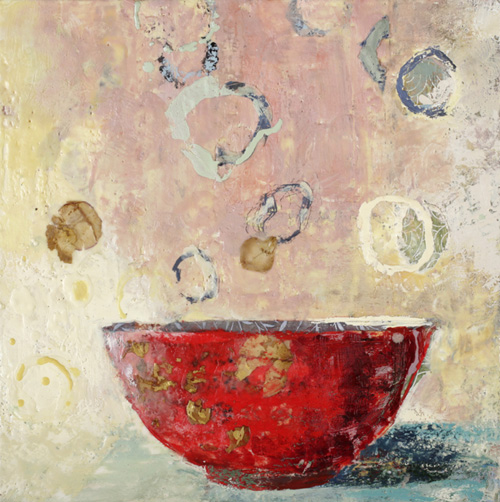 Rev. Sumi Loundon Kim is the Buddhist chaplain at Duke University and minister for the Buddhist Families of Durham, North Carolina. She has published two anthologies about the path of young Buddhists: Blue Jean Buddha and The Buddha’s Apprentices.

Rev. Sumi Loundon Kim is the Buddhist chaplain at Duke University and minister for the Buddhist Families of Durham, North Carolina. She has published two anthologies about the path of young Buddhists: Blue Jean Buddha and The Buddha’s Apprentices.