Found in Translation: on the Day of the Dead

Last October my husband, Patrick, and I went on vacation to San Miguel de Allende, serendipitously arriving just as altars were being prepared to celebrate el Día de los Muertos, the Day of the Dead. I was new to Spanish, to Mexico and to Mexican festivals, but as a longtime follower of the Buddha Way, I was already a student of death. So in our daily one-on-one Spanish tutorials, while Patrick and his native tutor practiced grammar, my tutor, Oralia, and I conversed in Spanish about this holiday when the dead return for their yearly visit and the living make altars to share their food with the dead. Oralia and I sat at a little table in the garden of the Instituto—two women, one from Berkeley and one from San Miguel—discussing the symbolism of the offerings: of seeds and water, of candles and dancing skeletons. To translate a point, Oralia leaned over my notebook and drew a little skull, then labeled it with the Spanish word calaverita. On the forehead, she wrote my name: BARBARA. Our eyes met and we both laughed. That’s when we connected—at the gritty junction where dark humor and truth converge.

Oralia sent me out into markets, squares and cemeteries to see for myself. Nose pressed against shop windows, I relished miniature dioramas of ordinary people—my favorite “the birth,” with the doctor, in surgical greens; the mother, legs spread; and the baby, emerging—all with tiny skull heads, all equally, whimsically, mortal. I immersed myself in the evolving imagery of el Día de los Muertos, dating all the way back to Coatlicue, the Aztec goddess of death and rebirth, who wears a necklace of human hearts, severed hands and skulls. 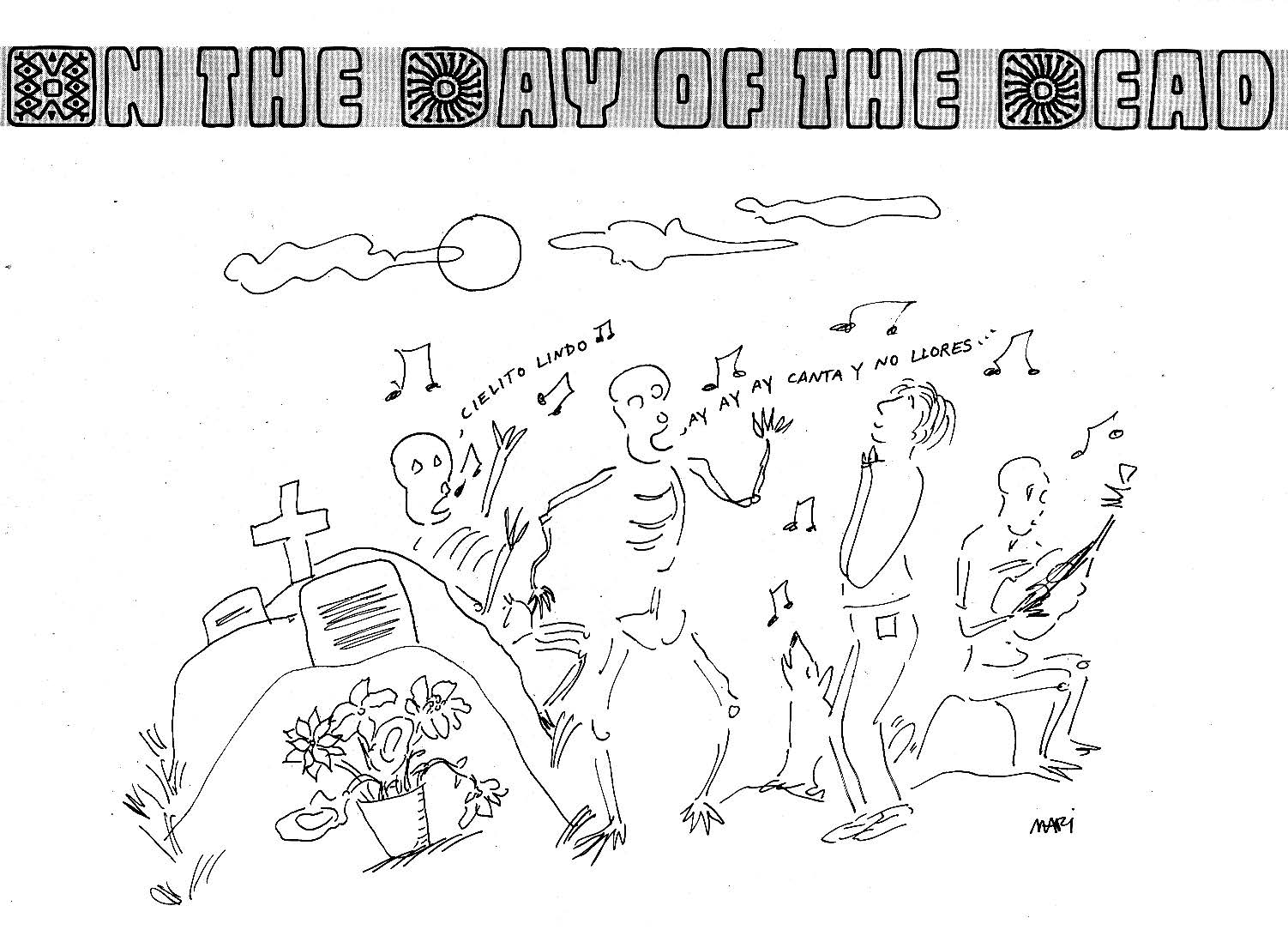 Throughout the city, paths of marigold petals guided the returning souls of the dead to feast at the many colorful altars of fruit and gourds, hearkening back to festivals of the harvest. Playful public altars showcased a mocking Death, with his scythe and sombrero. More solemn altars in homes and cemeteries featured offerings tailored to the personal passions of deceased relatives—tamales, a gardening hoe, a bottle of tequila—and were more focused on grieving. Confused, I asked Oralia, “Is this festival of death alegre o triste (happy or sad)?”

“Más alegre!” she flashed. Mexicans, she told me, don’t take either death or life too seriously. That was an angle I hadn’t expected. It made me think.

I’ve always loved to laugh, but much in this wide world has felt heavy and dark—no room to joke. And in my own personal life, some things have felt just plain sad and unfair, particularly things having to do with my fathers. I told Oralia, “Mi padrastro (my stepfather) has Alzheimer’s. Mi padre is dead.”

For me, the celebrations of the dead in San Miguel called to mind these two men and brought up thoughts of their comings and goings—mostly their goings. I felt the huge weight I’ve given them both in my personal story. And I noticed that for most of my life I’ve blamed—and praised—these two weighty figures for just about everything. In fact, I realized, I’ve often thought that pain over my blood dad’s death when I was still in my twenties—that, and still-raw memories of how he’d left home when I was three—catapulted me into Buddhist practice.

Deluged by cartoon images posted in the Mexican squares—of heroes on skeleton steeds and flouncing ladies with skeleton tibia—I began to see my dads in caricature on the big screen of memory. My blood dad strode in, handsome in a white naval uniform, while my stepdad galloped past in blue jeans and Stetson hat. The White Knight, as my grandmother had dubbed my blood dad, took off for parts unknown, leaving a three-year-old me with a bereft mom; and she and I spent a year “recovering” in Rome, she painting and having an affair and I having tantrums. Hero Dad abandons ship. When we returned to the States, my stepdad, a giant Texan, arrived to save the day; he could wiggle his ears and raise and lower his furrowed brows—bing bong, bing bong—all to my delight. Cowboy to the rescue. But the Texan loved women and drink, and the White Knight did play his fatherly role from time to time—only to disappear once more. And so it went—each of the dads, Savior, Villain, then Savior again, with myself, Victim, Heroine, Victim—all moving through memory on these Days of the Dead.

In the year since our trip to San Miguel, my stepdad also died. On a second vacation in Mexico this coming fall, I will make altars for the two dads and perhaps dedicate a calaverita to each of them. I wonder what kinds of altars I can create for these men. I’d like to be playful, but that doesn’t come easily as I sort through occluded memories of the two. Over the years, when I’ve thought of my blood dad, it has felt so heavy and tragic: his erratic daddyhood, tormented marriages, cancer and a failed attempt to drive the car into a tree. His suffering, my loss—all of it. Little material here to suggest a whimsical offering. And as to my stepdad—yes, he was playful and tender, but he was also sometimes changed by alcohol into a stranger not to be trusted or withdrawn into his own brand of inner torments. Few lighthearted gifts come to my mind for his altar.

So what are these laughing altars about anyway? Are they dismissive, derisive, mean-spirited? Might they be seen as forgiving, accepting, recognizing our shared human frailty—thus fundamentally kind?

What I’ve really been trying to figure out is how best to hold the “hard stuff”—conflicts, failed understandings, sickness, inevitable loss, assured death. As I see it, this is what altars are for, and this is why I practice Buddhism—to find a way to hold experience. It can become a habit to either dismiss or indulge the painful (or the pleasant), but I am gradually finding the “middle way.” Years ago, I asked Tenzin Reb Anderson: “Some Buddhist teachings seem to be saying that nothing really matters. Doesn’t everything matter?” Reb smiled. “Nothing matters and everything matters.” When he said that, I wondered if this was a cop-out. Or was it a wise paradox pointing toward something mysteriously true? I recall now how among my college friends, when two seeming opposites converged, we used to quote a phrase from Shakespeare: “Both, both.”

I think again of Coatlicue, the Aztec goddess whose opposing qualities intersect—both dark and light, both destruction and creation, both death and life. So what about the altars? Can’t a serious altar and a laughing altar converge?

Another conversation with my tutor/translator suggested a possible answer. Over these weeks, as we’d discussed the Day of the Dead, we’d both hinted at the intimacies of our lives, at stories of women and men, of husbands and fathers, of love and heartbreak. On our last meeting, I tried to explain to Oralia that at age four I had lived in Italy with my mom, just my mom. “I went with my mother because my father se fue (had left us).”

I was stunned by what happened next. We both began to laugh. Who knew exactly why, but something felt unbearably funny. The typical unreliability of men? The imperfections of life? The failure of love?

As Oralia had often done for me, I drew stick figures in my notebook for her, and with her help I translated a little more of the story: “My father fell in love with otra mujer (another woman).” This time the laughter was uproarious. We were doubled over, the two of us rocking back and forth, tears flooding our faces. Each time our eyes met, we were overcome in a new crescendo of hilarity.

Afterwards, I realized that translating into another language is also translating into another way of understanding. It can truly reframe experience. Through my primitive Spanish and tears of laughter, I could now see my dad as a cad and a sweetheart, at once both and neither one. He was just an ordinary guy, and that seemed so funny. In fact, much of what I’d seen as extraordinarily sad or extraordinarily unfair in this father/hero story now seemed absurdly and comically ordinary. Maybe Oralia and I were laughing at the ways we humans endlessly goof up—and that made my own story even more hilarious. What a release it was to laugh at myself for having spent so many years feeling sorry for “me”: for the failure of ordinary life and an ordinary man to take care of me in the way I wanted.

In this “both, both” world I’ve explored through el Día de los Muertos, as I’ve translated my questions and memories into Spanish with Oralia, I’ve ended up with some of the very insights I’ve come to through Buddhism. Years of sitting on the cushion and watching my mind have allowed me to “translate” my experiences. I’ve changed the frame on what is happening, or what happened long ago, into a language of no-victim, of nonduality. Here rejoicing and grieving or forgiveness and accountability, like alegre and triste, coincide. In this way, translation into another tongue is not so different from translation into the language of Buddhism, each allowing a dynamic shift in perspective.

Last year in San Miguel I caught a glimpse of my blood dad—in translation—not as White Knight or Villain, but both and neither, as an ordinary guy. This year I’m going back to Mexico on the heels of my stepdad’s death; it’s his turn. As I think on it now, that complicated hombre whom I’d seen as so flamboyant in the extremes of his living seemed resonantly ordinary in his dying. In the last stages of pneumonia, lulled by morphine, with lungs filled with fluids, he took long, rasping, unpredictable breaths. As our family sat with him, the jagged rhythm of his breathing filled the room. I heard it like tides running over sand and found it unexpectedly calming. It felt to me like those tides were drawing us from the idiosyncratic to the ordinary—the universal ordinary, beyond praise and blame.

Early on the day before my stepdad died, his feet and hands turned gray and cold. By evening, his senses were shutting down one by one. When we put our faces right up in front of his, he no longer registered a response. Now, even when my mom held his hand, he couldn’t squeeze back. Except for irregular labored breathing, he was immobile. As I was leaving, I came up close by his face. He was pale and bony, his eyes blank, his eyebrows pronounced in dark tufts. I found myself saying to him, “You sure have the most amazing eyebrows!” There and then, to everyone’s shock, he raised and lowered, raised and lowered, those tufted brows. Bing bong, bing bong. Another ordinary guy, on his way, completely heartbreaking and completely playful. Both, both.

Before going to Mexico, Barbara Gates’s only knowledge of Spanish was a poem on love by Bécquer and the song “Cielito Lindo.”

Mari Gayatri Stein (1947–2017) contributed cartoons and drawings to almost every issue of Inquiring Mind, from 1994 through 2015. She lived in Southern Oregon with her husband and their dogs.

Mari Gayatri Stein (1947–2017) contributed cartoons and drawings to almost every issue of Inquiring Mind, from 1994 through 2015. She lived in Southern Oregon with her husband and their dogs.