As Wes Nisker reminds us in this issue, from the vast evolutionary perspective, we humans are the “new animals” on the block. Likewise, we practitioners of Buddhism in the West are the “new kids” embracing this ancient wisdom. Many of us are first generation students of the Dharma, “converts” who didn’t grow up with the teachings. In fact, many are refugees, or perhaps “co-practitioners”; we’re Christian-Buddhists, Bu-Jews, and Buddhist-Democratic-Humanist-Agnostics. As relative newcomers, we may wonder how best to pass along the teachings to the next generation. Gil Fronsdal begins by illuminating the little-known role the Buddha took in guiding his own son, from the age of seven, toward awakening. More familiar is the story of the Buddha renouncing the home life—and his wife and child—to pursue enlightenment. Bhikkhu Bodhi and Norman Fischer challenge common assumptions as they consider this story, each from a radically different angle.

In recent years a second generation—including the children of some of our Western Buddhist teachers—has been coming of age; we include their stories, and others, in our “Sons and Daughters of the Buddha” feature. Of course, the Dharma has been passed along for many centuries throughout Asia, and women have played a fundamental and often unacknowledged role in its transmission. We interview filmmaker Rosemary Rawcliffe on this subject, focusing on her Women of Tibet trilogy and the Great Mother archetype.

This issue also presents an array of practice approaches. Sayadaw U Tejaniya’s more “relaxed” form of retreat practice has recently inspired Western vipassana students and teachers, as Mirka Knaster reports. Joseph Goldstein describes the use of perception and conceptual thinking in our development of meditative awareness.

Finally, poet Andrew Schelling muses on “The Sound of Poetry” and introduces us to the haibun form.

With our next edition, Fall 2008, we will be celebrating our twenty-fifth anniversary. Our theme will be “The Four Heavenly Messengers” —the sick person, old person, corpse and monk. With the journal in its twenty-fifth year, the two founding editors in their sixties, and many of our readers meeting their own emissaries of sickness, old age and death, we expect our next issue to be full of hard-won wisdom. You’re invited to celebrate our anniversary with us. 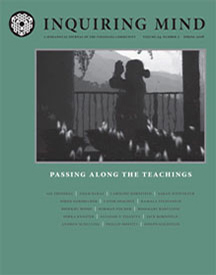 Rosemary Rawcliffe, founder of Frame of Mind Films, is an EMMY® award winning producer and director. This image is a still from her film trilogy Women of Tibet.

Rosemary Rawcliffe, founder of Frame of Mind Films, is an EMMY® award winning producer and director. This image is a still from her film trilogy Women of Tibet.