Entering the Way with All Beings

Eighteen years ago, I quit driving on the freeway. Too many lanes, too many cars, rushing, careening, out of my control. Recently, I’ve been examining my nasty freeway fear, drawing on courage I didn’t know I had. And I’ve been forcing myself into the car and onto the roads. I’m trying out the driver’s seat in the tradition of the Lesser Vehicle, taking on what most scares me.

A New York City girl, I didn’t get my license until I was twenty-two. From the start, my driving was skittish, prone to extreme reaction. That’s how I got in accidents—in my thirties a bad one on San Francisco’s Interstate 80. To avoid an accelerating bus, I jerked the wheel; my car spun wild, hitting four others, and was totaled. My catastrophic expectations were confirmed. After a year’s rest, I resumed my freeway commute. Now the fear was palpable: my heart rushed, my palms sweated, my feet turned numb. From Buddhist teachings, I had gotten a clear message: life is inherently unsafe. The challenge is to strengthen the mind in the face of real dangers. But I still craved safety.

Pregnant for the first time at forty-two, and only after years of trying, I now had to protect this new life. My dread of the freeway intensified. One morning, in rushing traffic, my body seized up in protest against the speed of the cars, the menace of big rigs. Suddenly, just ahead of me, a flatbed truck loosed a cascade of metal poles onto the road, one pole grazing the nose of my little ’69 Toyota. That was it. No more freeway driving.

Even though my husband Patrick and many friends gallantly ferried me around over the years, quitting the freeway limited my world—my writing, my friendships and even motherhood. In fact, if it hadn’t been for this freeway phobia, I might well have been a great soccer mom. My daughter Caitlin’s team started traveling when she was nine. There was nothing I loved more than watching those intrepid girls zigzag up and down the field. But I never could perform my primary duty, long-distance chauffeur.

When Caitlin was twelve, I felt I had to do my share in the carpool. On the freeway it would have been a quick drive to the field, but instead I took a time-consuming detour on surface streets. Even following this circuitous route, there was no alternative to a tunnel jammed with fast-moving traffic. As I approached that dark tube, I panicked. Just then, the girls started taunting me: “Why don’t you like freeways?” “What are you afraid of?” “Most people aren’t afraid of things.” Finally, unable to contain my upset, I started to cry. As tears streamed down my cheeks and off my chin, those soccer girls were shocked into silence.

I vowed I would master this freeway terror. But it wasn’t until five years later, just this year when Caitlin began taking driving lessons, that the resolution to conquer my fear outweighed its hold on me. As a mother and mentor, I refused to create a lineage of fear. I would take lessons too.

My driving teacher arrived, to my relief, in a Maha vehicle. I was struck by his impeccable posture. An Asian man with a bald head, Ron had an energetic presence. To me he didn’t seem so much like a driving instructor as—was it wishful imagining?—a meditation master.

To begin, he carefully polished the rearview mirror, removing all smudges until it shimmered. He directed me to look into the mirror as he walked toward the car from behind. Then he disappeared into the blind spot. This gave me a jolt. I realized that for me, all of driving had been blind. The only way I had ever been able to get myself off the entrance ramp and into freeway traffic was to grit my teeth, plunge in blind and pray.

As my protector, Ron assured me that his dual controls allowed him not only to brake but also to apply gas. Best of all, he could reach over and take the wheel, which indeed he did sometimes in our early lessons. Despite his reassurance that I would be safe, when I had to start the car, I got so anxious I couldn’t tell the gas from the brake. Once on the freeway, my hands sweated so much they slipped on the wheel. “Kleenex?” Ron offered. As a semi gained on us, I felt my feet freeze up, then become flaccid. That speeding hunk of metal would overtake our car, suck us into its vortex, and obliterate us in multiwheeled madness. What a relief when Ron began to steer.

But gradually, I started to trust the dual brakes and gas, and, most of all, that my guardian would take care of emergencies. Ultimately, I knew I had to trust myself. That’s just what I couldn’t do. I simply couldn’t trust my mind to stay steady and to respond to the unexpected. How would I ever drive alone?

After months of turning toward the fear in meditation, in therapy and in my writing, I felt something change. I was able to hear what Ron had been saying to me all along. Up until then I had only been following commands: speed up, slow down. But one day I realized that Ron had been repeatedly alerting me to relationships with other drivers: “Leave enough room for maneuverability—for you, for other cars. If a car doesn’t slow down when you turn on your blinker, turn it off, wait for that car to pass, and then turn your blinker on again. Drive predictably so other cars will know what to do.”

It was a complete shift in view. I felt my sense of identity reconfigure. Our car was a moving component in a field of cars rushing forward in relationship to one another. There was an elaborate play of signals among the players. I saw it as a vast ongoing soccer run with the car players all moving up the giant field together. But in this game, there was no opponent. The goal was to allow everyone to see and move easily without colliding or competing. We were all on the same team.

Obviously, many people don’t realize it’s all one team. I never did. To me, the freeway meant an isolated me against the enemy. And the enemy was everyone else, an out-of-control chaos of speeding cars and trucks. The only way I had known to navigate this nightmare was to take the blind plunge.

This dramatic change in perception returned at odd moments in the following days. I saw continuously changing relations in an interrelated universe. The freeway had given me a glimpse into relatedness and a suggestion of a radical possibility, ongoing nonverbal conversation.

Last weekend as Caitlin drove around town, I drove a three-bridge loop on my own. I was still scared but more aware of the give-and-take with other cars.

Of course, the freeway will always be intrinsically treacherous, but I’m learning to more safely navigate its dangers. I had thought that my main stumbling block was lack of self-trust, but that wasn’t quite it. My persisting fear had been rooted in a sense of a separate me against the world. Finding trust was only possible by changing how I saw the interplay of self and world. With that shift, I began to relax.

When I told friends about my vision of freeway soccer, two remembered Dharma talks by the British monk Ajahn Amaro when he’d discussed road rage. Conjuring up the scene of a congested freeway, he’d reflected on the rage people so often feel against “the traffic.” With a shift of perspective, you can see that to other drivers, you are the traffic. Thanks to my driving master and thirty-plus years of meditation practice, I’ve come to a like understanding.

For so many years, I’d been angry at myself and ashamed of quitting freeway driving. Yet how delightful that this ultimately became a way into unsticking a fixed self-view, into seeing that I am the traffic and that there is no enemy. If it took an eighteen-year pause to process and honor the fear, that must have been exactly what I needed to do to navigate the Great Buddha Highway.

Please do not copy or download image without the artist’s permission. 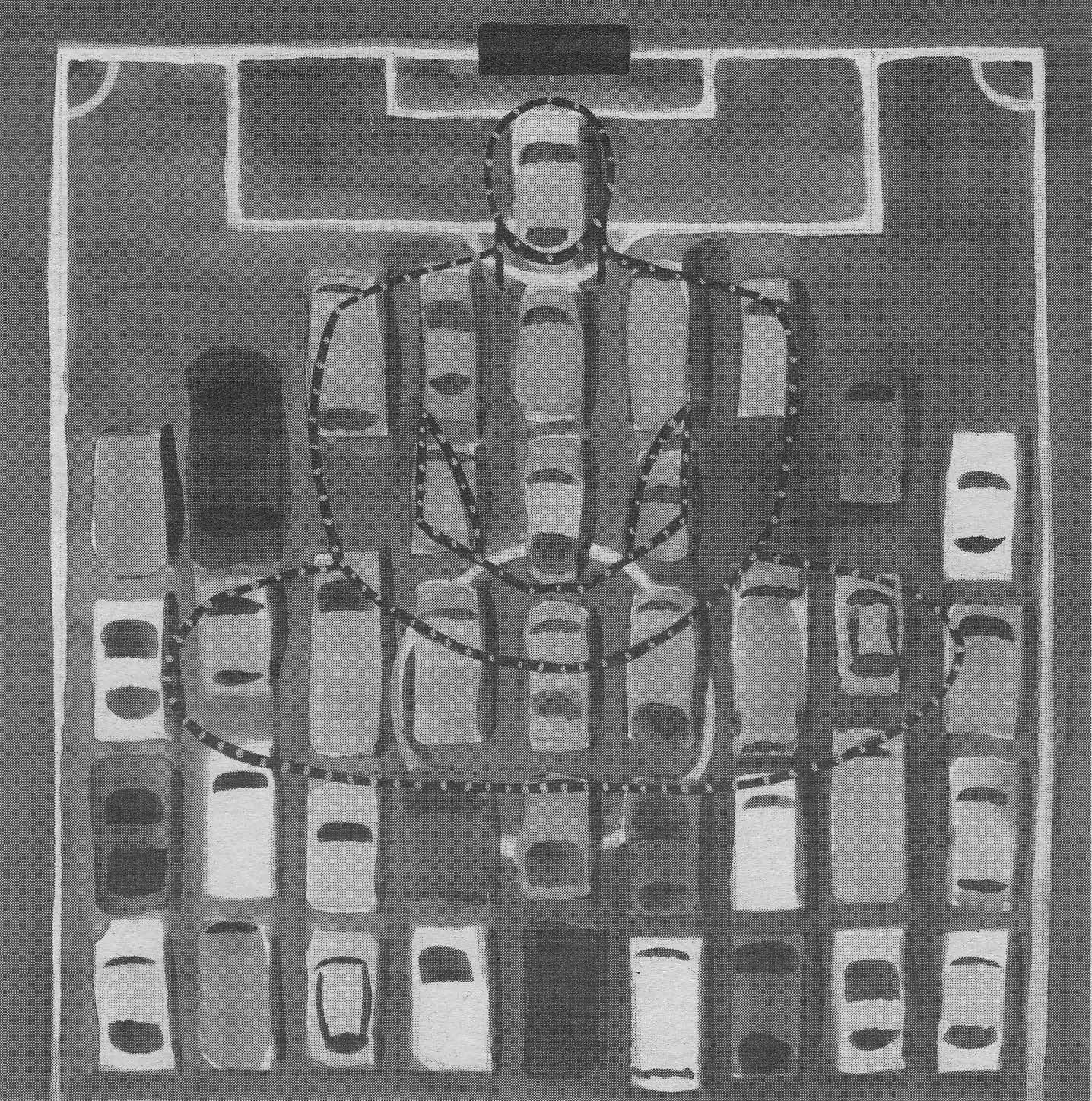