Book of Longing, by Leonard Cohen

I’m sure I’m not the only person for whom Leonard Cohen’s songs bring back the 1960s with a peculiar vividness. Softer than Bob Dylan’s, without its sometimes almost sneering edge, Cohen’s voice could seem wiser, especially in its acceptance of paradox and ambivalence. Think of how, in his most famous song, “Suzanne,” the narrator’s simple response to the “half-crazy” girl’s sexual availability modulates into the recognition that she is a kind of medium, even a saint, who “gets you on her wavelength” and “lets the river answer.” Once, with Cohen’s gracious permission, I incorporated a stanza from “Bird on a Wire” into one of my own poems:

I saw a beggar leaning on his wooden crutch,

He said to me, You must not ask for so much,

And a pretty woman leaning in her darkened door,

She cried to me, Hey why not ask for more?

These words summed up the split in the ’60s between social concern and sexual revolution. But they also posed a koan relevant to many of us, at whatever time: How can we care about our own small desires when other people are really suffering? But if we do not care about our own desires, how will we ever truly know ourselves?

Cohen’s new Book of Longing, a congeries of poems, prose poems and drawings from the last twenty years, can be read either as a farewell to his time as a Zen monk on Mt. Baldy, or as a distillation of what he learned there. This is characteristic. Cohen belongs to the tradition of outsider Zen poets, like Ikkyu, who feel furthest from enlightenment when they are most in harmony with institutions. If he portrays himself palling around with his roshi, you can be sure they will be eating red meat and drinking “$300 scotch.”

He summarizes his motives for writing as “Desire the horse, / Depression the cart.” Notwithstanding the interesting question of when, and how often, the cart gets in front of the horse, desire and depression are not talked about much in traditional Buddhism, except as obstacles to the Way. But for Cohen, they are the Way. His visions of a “huge woman, / who, even though she is all women, / has a very specific character,” and who “plucks me out of my skin . . . several miles above the pine trees,” after which he feels a mysterious forgiveness toward all his experiences of unrequited or inadequate love, are the answer to a koan as surely as anything that might be said in the dokusan room. Even depression, with its sense of the worthlessness of everything, can be of help if it teaches us that “I . . . create the cosmos / by myself.”

John Tarrant has written in The Light Inside the Dark about how Zen has traditionally neglected the emotional “soul” in favor of the transcendental “spirit.” Soul is connected to the darkness of moods but also to affection. “Soul,” Tarrant says, “is weak because it loves—which is of course its strength.” Cohen’s emphasis on longing seems close to Tarrant’s on soul. For both of them, it can be the place of disorientation where spiritual work begins, not just an impediment on the path.

Of Cohen’s more public pieces, one of the most interesting takes up the idea that we live in a “religious moment,” partly because we live in a moment of “bewilderment.” Many of us who are Buddhists have had to deal with the suspicion, on the part of secular liberals, that any interest in religion makes one an ally of President Bush and the Christian Right. How can we tell our own wish to “enter The Innermost Place” from the “many strange constructs of just what Authority is” that “arise in every mind”? Cohen can’t be said to resolve this difficulty; he alerts us to it, with the wry Zen humor that deconstructs our own—but also anyone else’s—trust in their own mind-created categories. “Have no doubt, in the near future we will be seeing and hearing much more of this sort of thing from people like myself,” he writes.

I have to admit that I picked up this book with great curiosity about the content but trepidation about the poetry. Songwriters often allow more chaos and imprecision into their words than poets do, trusting the music to carry a precise, if coded, emotional meaning. Senior poets who aspire to a Blakean rhyming simplicity sometimes sound merely, well, simple, as Allen Ginsberg could in his later years. I’m happy to say that both of these fears proved completely unfounded. When Cohen leaves a poem a little mysterious or unresolved in its turnings, he does so consciously, to remind us that “these cries of mine . . . are the road, / and not the sign.” His is, indeed, an elegant “shorthand of / the unborn mind / with Graceful effort / all combined.” But he is also good at the more traditional kind of Zen poem, in which a moment of perception opens both inward onto the dissatisfactions of “soul” and outward onto the vastness of “spirit.” Let me end by quoting one such poem, “Wish Me Luck,” in its entirety:

across the open window

and here he is

on a thread of milk

I haven’t finished anything

in a long time 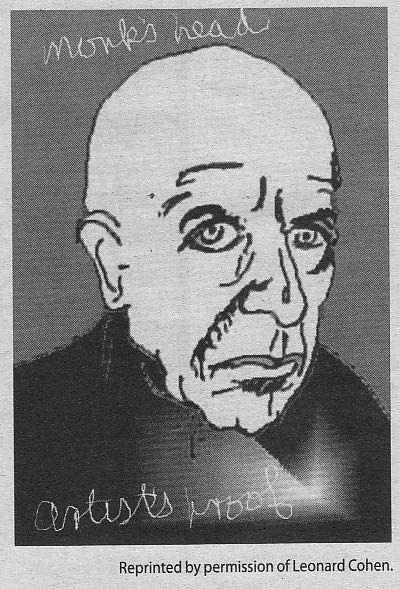 Alan Williamson is a poet, a professor and a Zen student with Pacific Zen Institute. His The Pattern More Complicated: New and Selected Poems, which includes the poem “Listening to Leonard Cohen,” is available from University of Chicago Press.

Alan Williamson is a poet, a professor and a Zen student with Pacific Zen Institute. His The Pattern More Complicated: New and Selected Poems, which includes the poem “Listening to Leonard Cohen,” is available from University of Chicago Press.