My introduction to Buddhist practice came about a dozen years ago when I ventured into a cramped apartment basement in San Francisco for a basic vipassana meditation class. I wouldn’t have guessed at the time where this dharma path would take me.

Recently, I found myself far from San Francisco, treading barefoot through a small village in Thailand, following a group of monks as they received almsfood into their bowls from the hands of devout laypeople. The next day I joined thousands of disciples of the late Thai master Ajahn Chah in circumambulating the stupa containing his relics.

On my trip I also met many of Thailand’s most senior monastics, who manifested a wide range of skillful means. Ajahn Gavesako is a popular meditation teacher to civil servants and schoolchildren; Phra Payutto is a renowned Buddhist scholar and author of dozens of dharma books; and Maichee Sansanee has created an urban oasis in Bangkok to shelter unwed mothers and train hundreds of youth and families.

The focus of this issue of Inquiring Mind is likewise on a wide variety of practices: study and contemplation, ethical living, pilgrimage, chanting, not to mention mindfulness meditation. As I was reminded in Thailand, there are many skillful means to discover the truth, to foster positive states of mind, and to gain liberation. We invite you to explore the practices of people who have plumbed them in great depth.

Four extraordinary teachers of Buddhadharma—Jan Chozen Bays, Joseph Goldstein, Jon Kabat-Zinn and Alan Wallace—engage in a spirited conversation on mindfulness and how it operates in our lives. Bhikkhu Bodhi, the most eminent Pali-English translator of our time, describes his lifelong immersion in the suttas. Rev. Heng Sure converses over a wide range of themes with religion “sage” Huston Smith.

Baseball Hall of Famer Orlando Cepeda shares his enthusiasm for Nichiren Buddhist chanting practice. Zen teacher Susan Murphy reflects on our sense of place in “A Promise to the Earth,” and midwife Nancy Bardecke writes on birthing as practice. Kevin Griffin wonders whether he’s a bad meditator.

Her full moon practice of the Eight Precepts is Quilley Powers’ theme on the Practice page. To round things out, we include short Dharma gems by Sam Harris and Joseph Goldstein.

We hope that the practices described in this Inquiring Mind will broaden—and deepen—your own.

— Dennis Crean and the Editors 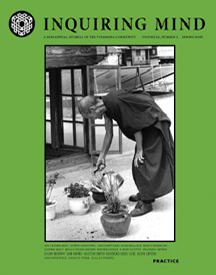