A Promise To The Earth: The Practice Of Place

The persistent bent of electronic forms of communication is to make every point on the Earth interchangeable, and every sensuous and informing connection with place just slightly beside the point. You could say this process of generalizing the Earth began with the end of hunter-gatherer life and the loss of its strong network of affiliations with the other, animal nations, and the mana of sacred sites that were nodal points in a cosmology of the larger self. The habit deepens when food is industrially farmed and shipped globally under refrigeration, further estranging us from knowing that we flourish only in a web of intensely localized life in actual places, vitally dependent on five inches of topsoil and enough rain.

And yet nobody lives somewhere in general. It’s impossible to do that, even when the great slug of industrialized sameness has moved through a place, beggaring the imagination and further stripping away the taste of the local, the indigenous, all the ingenious sense of fit that comes with adaptation to place rooted deep in time.

We cannot but live somewhere in particular, a particularity that our bodies register and express so intimately that it is finally impossible to say that it is not our own body. The air we breathe and feel on our skin, the water we drink and bathe in, the smell of the soil and the plants springing from it, the weight of our footsteps and the answering pressure of the Earth, the shape of the hills, the light of the sky. To overlook all this and to live in vagueness toward where we live, the place that lives us, is to place our living place in peril.

Zen, as a stream of the Mahayana, sees realization as an ongoing profound intimacy with the other, including all sentient life right where you are, rather than as a final, personal transcendence of the joys and sorrows of embodied life. And so it could not possibly dream of turning away from the Earth.

The first bodhisattva vow arrives with a truly indigenous consciousness and force: the vow to save the many beings is a vow to save all our relations in all directions from our own sleep of ignorance and forgetfulness toward who we are and what this life is. There is a real urgency in this matter of having a Buddhist practice that is fully earthed, one that Dogen echoes when he says, “When you know the place where you are, practice begins.” (And not until.)

Knowing and being known by “the place where you are” is not compiling a mass of information but is more like Moses seeing the burning bush, seeing the fire that runs through all things. To see the bush burning is to stand in a world “not of isolated things, but of processes in concert,” says William Bryant Logan. It is to stand, barefoot like the old saints, on holy ground once more.

Actually, every stage of practice, including realization itself, forms and deepens a covenant with the Earth, with the place where you are. Recently I delighted in learning that the old legal meaning of covenant is “a promise to the Earth.” The promise is mutual. When you pay attention to moment-by-moment being here, you pay respect to the Earth. And that act of elemental kindness is met by another: the Earth reciprocates with a glimpse of reality that we call enlightenment. To touch the original ground of mind is to realize that this human body is the world.

So practice is the beginning of a conscious recovery of the indigenous or native—born here—soul that we all had, whatever our ancestry, not so far back. It restores an agreement to begin to recognize the Earth with eyes that can see past separation, and act accordingly. This is a totally engaging and creative act—and the only real way to begin to say thank you. And it begins and ends in dropping self-concern in favor of paying attention.

When the Buddha sat at the foot of a tree to attain realization, and touched the Earth, he was turning back to a more indigenous, forest-dwelling cast of mind. The entwining of Ch’an with Taoism, Zen with Shinto, Tibetan Buddhism with Bon spirituality continues the story of Buddhist practice moving from place to place and discovering a natural strong affinity with the old, native Earth-based spiritualities it encountered and their protocols for creating and tending good relations with the source of life.

Over the past few millennia we have lost all our good manners and become the spoilt brat among the species. We live by damage. We take it as our due to live beyond our means and at the expense of all other species, as well as our own descendants. A practice like Buddhism is a great chance to wake up to our selves and cease being able to live by damage. In the deepest sense, it is not a personal consciousness project in the end—that’s just the start. It stretches to the widest belonging possible in this unrepeatable human body in this unrepeatable place, and to actualizing that in all the aware gestures and choices of our lives.

I teach and practice Zen in the oldest continent, Australia, where country is still sung. And even where it is no longer sung, the Dreaming is still right here if you can be patient and grow quiet enough to listen, and stay open. It has seemed natural to seek out Aboriginal Law holders and actively explore the affinities and resonance between two spiritualities, Aboriginal and Zen, as they meet in the place where I am. The meeting can’t be hurried along, but if the rain falls, the Earth can’t help getting wet. Some intimacy with an Aboriginal sense of being here, and some tending of that awareness, can only green Zen practice here in the ancient red continent, can only make it more Zen.

And it does. Meditation itself is a ritual action of respect—literally, “looking again,” with wonder and forbearance. Respect, in both traditions, can ripen and mature into a conscious minding of the universe, distinct in each human being who is awake.

To wake up is to become fully lucid in the very middle of the great dream of the Earth. To be deeply in a place and really feel the life of rocks and twigs and clouds and grizzlies or wombats is always like a dream. Even ordinary, nondescript city places are completely awake and responsive to this kind of attention. And in a dream, everything is inside you. Having entered your stronghold, it leaves behind the gift that you seem a little more unafraid to live, unafraid to die.

That brilliant dream of realization is not a set of understandings but mind opening and dropping away to the ongoing fact of being reality—unborn and inextinguishable—nowhere but here, no time but now. Auntie Beryl Carmichael, an Aboriginal elder, said it as a piece of elemental uncommon sense: “Reality is connectedness. If you’re not connected, you’re not in reality.”

Despite the spiritual emergency of the planet and the cultural disaster of our greedy times, real attuning is always unhurried—timeless—a practice of patience. There’s one of those tiny, koan-like Hasidic tales Martin Buber tells that knows something of this matter:

After the Great Maggid’s death, his disciples came together and talked about the things he had done. When it was Rabbi Schneur Zalman’s turn, he asked them: “Do you know why the master went to the pond every day at dawn and stayed there for a little while before coming home again?” They did not know why. Rabbi Zalman continued: “He was learning the song with which the frogs praise God. It takes a very long time to learn that song.”

Which is why it is so pressing.

Please do not download or copy image without artist’s permission. 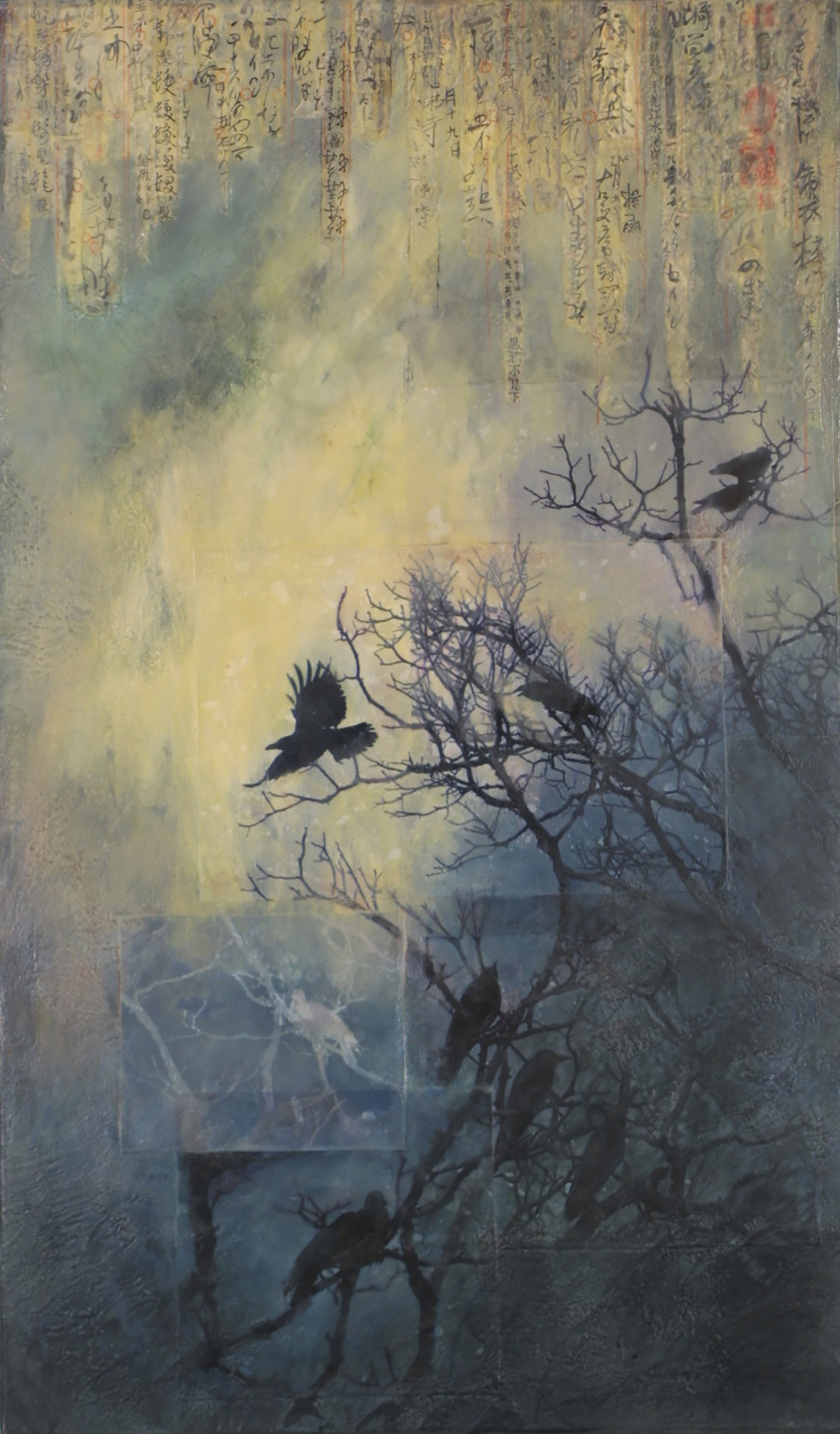 Susan Murphy Roshi teaches in Zen Open Circle in Sydney, the Melbourne Zen Group, and at her rural retreat center, Cloud Mountain. As well as being a film and radio program maker, she is the author of Upside Down Zen (Wisdom, 2006), and Minding the Earth, Mending the World (Picador, 2012), which brings both story and Zen koan mind to bear on responding to the global environmental crisis of our time.

Susan Murphy Roshi teaches in Zen Open Circle in Sydney, the Melbourne Zen Group, and at her rural retreat center, Cloud Mountain. As well as being a film and radio program maker, she is the author of Upside Down Zen (Wisdom, 2006), and Minding the Earth, Mending the World (Picador, 2012), which brings both story and Zen koan mind to bear on responding to the global environmental crisis of our time.