The End of Oil, Climate Change, and the Great Turning

In Buddhism there are two mudras, or hand gestures, that I cherish. Statues and paintings of buddhas and bodhisattvas often show them. One is the “fear not,” or abhaya, mudra—right hand raised at chest level, palm outward. It says, I will not be afraid of the fear, I will not close down, I will stay fully present. It’s strikingly similar to the gesture of greeting associated with American Indians. “How!” they said, as I saw in the movies, and later I learned the meaning of that raised empty hand: See, I carry no weapon, don’t be afraid.

The second hand gesture is the Earth-touching bhumisparsha mudra. Its other name is Calling the Earth to Witness, and it connects with the story of when Gautama, soon to become the Buddha, sat down under the bodhi tree. I picture him saying, in effect, “I am not going to get up until I have broken through to the secret of the suffering we cause ourselves and others. Until I wake up to that, I am not going to move.” This intention of the Buddha infuriated Mara, the embodiment of sin and death. Mara sent demons to frighten Gautama and dancing girls to distract him; but the Buddha-to-be didn’t waver. Finally, Mara challenged him outright: “By what right and authority do you think you can solve the mystery of suffering? Just who do you think you are?”

So we can make that gesture, too. We can touch the Earth. That act, even if only mental, reminds us of who we are and what we are about as we confront the collapse of our oil-based economy and our oil-damaged climate. We are here for the sake of life. By the authority of our belonging to Earth from the beginning of space and time, we are here.

These Buddhist mudras are mirrored in the protocol which the Haudenosaunee, or Iroquois Six Nations Confederacy, used when opening their treaty meetings. You can make the following gestures mentally or physically.

We offer salutations and respect to all present at this meeting
and to all who will be affected by it.

We brush off the chairs on which we sit
to make a clear space for a meeting of minds.

We brush off from our clothing any debris picked up on the way—
to clear our minds of extraneous matters.

We wipe the blood from our hands—
to acknowledge and apologize for any hurt we have inflicted.

We wipe the tears from our eyes—
to acknowledge and forgive any hurt we have received.

We take the lump out of our throats—
to let go of any sadness or disappointment.

We take the tightness out of our chests—
to let go of any fear or resentment.

We acknowledge and pray for guidance
to the Great Creator Spirit of All Life.

The Six Nations Confederacy, we are told, weighed every decision by its effects on the seventh generation. To adopt such a practice ourselves, we would need to let the future ones figure in our minds. To help me do that, I’ve been trying to imagine what storytellers of the seventh generation may recount about us. Maybe they’ll say something like this:

Once there was a mighty people. They possessed the greatest concentration of economic and military power the world had ever seen. And that vast power of theirs derived from ancient sunlight stored deep in the body of the living Earth. They felt entitled to that black gold—entitled to use it all, leaving none for us who came after. They felt entitled to it even when it lay under other peoples’ lands. They felt it was theirs, because they had come to depend upon it in every aspect of their lives—in food, clothing, shelter, in travel and transportation and communicating with each other. They had lost the ability to imagine any other way of life.

A few voices warned that the black gold would run out and that its end was soon approaching. But those voices were hard to hear. More warnings came: that the burning of the black gold was disrupting the seasons and weather patterns, bringing vast climatic changes in the very metabolism of Earth. But that seemed too huge and too remote to take seriously, until . . .

Until, faster than anyone had foreseen, it all began to happen. The black gold grew harder to find, costlier to pump. They called that point, when the decline began, Peak Oil. And at the same time, it was plain to see how melting arctic ice was altering the ocean currents which had steadied the climate for thousands of years. Droughts and flooding increased, giving a hint of the suffering in store from hunger and rioting and mass migrations.

This much, we know, the future storytellers can say. What will they go on to recount? What ensuing drama will they recall?

That is partly up to us, of course, because we are living it. We cannot make the realities of the end of oil and climate change go away, but we can choose how we’re going to respond.

It seems to me that there are two kinds of response to massive collective trauma. One is to contract—to close down in denial and fear, to tighten the heart and the fist. The other is to open up—open eyes, heart, hands, freeing the capacity to adapt and create. We know we’re capable of that, because it is happening now all around our world.

A revolution is under way. You may not see it if you don’t know where to look, for in the words of Gil Scott-Heron,

“This revolution will not be televised.”

But once we become aware of this tidal change, the end of oil appears not as some hopeless, ghastly fate but as an adventure requiring all our wisdom and passion for life.

This adventure is what many of us call the “Great Turning.” It is the epochal shift from the industrial growth society to a life-sustaining society. This is the context in which to view the end of oil and climate change. Those two major disrupters of normalcy weave through all our other environmental battles, and they are at play, as well, in our militarism and social inequality and abuses of political power. More clearly than other crises and calamities, they sound the death knell of our industrial growth society.

So those future storytellers, looking back at our time, may go on to speak of the Great Turning. I can imagine them saying:

Our ancestors back then, bless them, they had no way of knowing if the Great Turning could succeed. No way of telling if a life-sustaining culture could emerge from the death throes of the industrial growth society. It probably looked hopeless at times. Their efforts must have often seemed isolated, paltry and darkened by confusion. Yet they went ahead, they kept on doing what they could—and, because they persisted, the Great Turning happened.

For us alive today in the midst of it all, we can learn to see the Great Turning by bringing into focus its three dimensions. They co-arise and reinforce each other. The first dimension is holding actions in defense of life; they function to slow down the destruction caused by the industrial growth society and buy time for more fundamental changes. The second includes all the life-affirming structures emerging now: fresh social and economic experiments ranging from land trusts, eco-villages and local currencies to alternative forms of education and healing, many of them inspired by old, indigenous ways. And the third dimension consists of a profound shift in our perception of reality. As the ecological and systems worldview takes hold, our planet appears to us not as supply house and sewer but as a living web of relationships. And as ancient spiritual teachings resurface, we awaken to our essential identity with this web of life and accept our sacred responsibility to honor and serve it.

This multidimensional revolution holds such promise that I can’t help thinking of it as comparable to the First Turning of the Wheel, when the Buddhadharma broke forth upon the world. Once again the reality of our radical interconnectedness with each other, and all beings through space and time, becomes clear. And now our very survival depends on our waking up to that reality.

This Great Turning alters none of the facts about the end of oil and climate change. It cannot save us from the immense and painful challenges they bring upon us; but it does enable us to engage them wholeheartedly with wisdom and courage. For, like those two mudras—Fear Not and Touch the Earth—it grounds us in our mutual belonging.

In that mutual belonging is our solidarity—with past and future generations and with each other. There is no end to that resource. It will never run out.

This article is adapted from a talk given on June 14, 2005, for the Postcarbon Institute in Oakland, California, where Joanna Macy appeared with oil-depletion expert Richard Heinberg, author of The Party’s Over and Powerdown. This piece also draws from her speech on May 9, 2005, in Oxford, England, for the Climate Outreach Information Network. 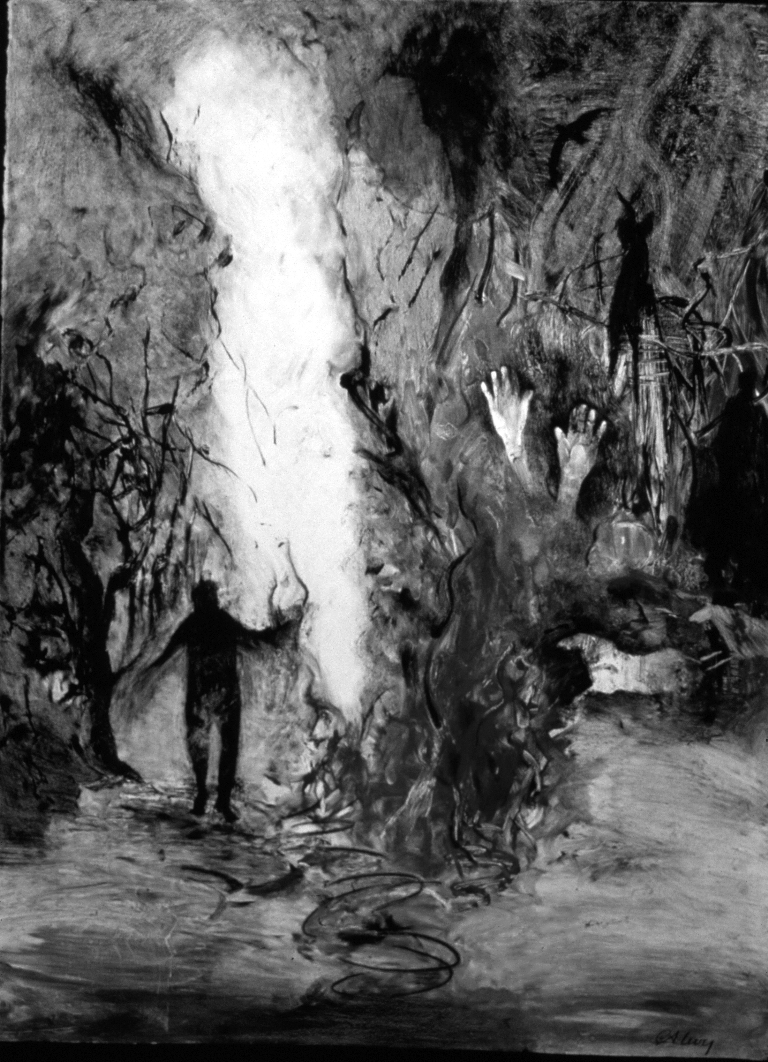