Considering the troubled state of world affairs—economic, political and ecological—we decided it would be useful to invoke some fierce compassion, and could think of no better way than to reprint Gary Snyder’s “Smokey the Bear Sutra.” We asked Snyder to provide some context for this timely and timeless text. —The Editors

I wrote “Smokey the Bear Sutra” in the spring of 1969, at a time when the nascent environmental movement was trying to stop the spread of nuclear power. We needed some strong, vital imagery to help us, and that’s how “Smokey” was born. My Smokey is essentially a dharmapala, a dharma protector, and I modeled him after the Japanese figure of Fudo. In esoteric Buddhism, Fudo is the patron of mountain ascetics and yogins, and his sadhana is still practiced in Nepal and parts of Tibet as well as in Japan. In Sanskrit he has the name Achala, which means “immovable, unshakable,” which is also what fudo means. He’s got a fierce visage and is usually pictured surrounded by flames, further evidence that the Forest Service’s Smokey is his North American incarnation. You could think of Fudo as a biker bodhisattva. He goes into hell and saves people whether they want to be saved or not. He’s a fierce bodhisattva.

The sutra’s basic message is that our sacred responsibility is to protect all of life. The very first and most important ethical precept in all of Buddhism is ahimsa, which means nonviolence toward all beings. And that’s not limited to human beings. So Buddhism is ecological in intent from the very beginning. Our responsibility is to protect life down to the smallest little creature, protect our community, maintain our own practice, and honor impermanence, all at the same time.

My own archetypal reading of the Fudo character is that he is also the Great Bear of upper Stone Age (no, not polar) bear cults. So in the sutra, I see Smokey as the incarnation of the ancient brown bear of the North and of Fudo at the same time. But, of course, the Forest Service didn’t know anything about all those associations and reverberations. That was part of the fun of it all, turning the establishment’s imagery on its head.

Once in the Jurassic about 150 million years ago, the Great Sun Buddha in this corner of the Infinite Void gave a discourse to all the assembled elements and energies: to the standing beings, the walking beings, the flying beings, and the sitting beings—even the grasses, to the number of 13 billion, each one born from a seed, assembled there: a Discourse concerning Enlightenment on the planet Earth.

“In some future time, there will be a continent called America. It will have great centers of power called such as Pyramid Lake, Walden Pond, Mt. Rainier, Big Sur, Everglades and so forth; and powerful nerves and channels such as Columbia River, Mississippi River and Grand Canyon. The human race in that era will get into troubles all over its head and practically wreck everything in spite of its own strong intelligent Buddha-nature.

“The twisting strata of the great mountains and the pulsings of volcanoes are my love burning deep in the Earth. My obstinate compassion is schist and basalt and granite, to be mountains, to bring down the rain. In that future American Era I shall enter a new form, to cure the world of loveless knowledge that seeks with blind hunger and mindless rage, eating food that will not fill it.”

And he showed himself in his true form of

A handsome smokey-colored brown bear standing on his hind legs, showing that he is aroused and watchful.

Bearing in his right paw the Shovel that digs to the truth beneath appearances, cuts the roots of useless attachments, and flings damp sand on the fires of greed and war;

His left paw in the mudra of Comradely Display—indicating that all creatures have the full right to live to their limits and that deer, rabbits, chipmunks, snakes, dandelions and lizards all grow in the realm of the Dharma;

Wearing the blue work overalls symbolic of slaves and laborers, the countless men oppressed by a civilization that claims to save but often destroys;

Wearing the broad-brimmed hat of the west, symbolic of the forces that guard the wilderness, which is the Natural State of the Dharma and the true path of man on Earth:

all true paths lead through mountains—

With a halo of smoke and flame behind, the forest fires of the kali-yuga, fires caused by the stupidity of those who think things can be gained and lost whereas in truth all is contained vast and free in the Blue Sky and Green Earth of One Mind;

Round-bellied to show his kind nature and that the great Earth has food enough for everyone who loves her and trusts her;

Indicating the task: his followers, becoming free of cars, houses, canned foods, universities and shoes, master the Three Mysteries of their own Body, Speech and Mind, and fearlessly chop down the rotten trees and prune out the sick limbs of this country America and then burn the leftover trash.

HE WILL PUT THEM OUT.

“I DEDICATE MYSELF TO THE UNIVERSAL DIAMOND

BE THIS RAGING FURY DESTROYED.”

And he will protect those who love the woods and rivers, Gods and animals, hobos and madmen, prisoners and sick people, musicians, playful women, and hopeful children;

And if anyone is threatened by advertising, air pollution, television, or the police, they should chant SMOKEY THE BEAR’S WAR SPELL:

And SMOKEY THE BEAR will surely appear to put the enemy out with his vajra-shovel.

Now those who recite this Sutra and then try to put it in practice will accumulate merit as countless as the sands of Arizona and Nevada.

Will help save the planet Earth from total oil slick.

Will enter the age of harmony of man and nature.

Will win the tender love and caresses of men, women, and beasts.

Will always have ripened blackberries to eat and a sunny spot under a pine tree to sit at.

AND IN THE END WILL WIN HIGHEST PERFECT ENLIGHTENMENT 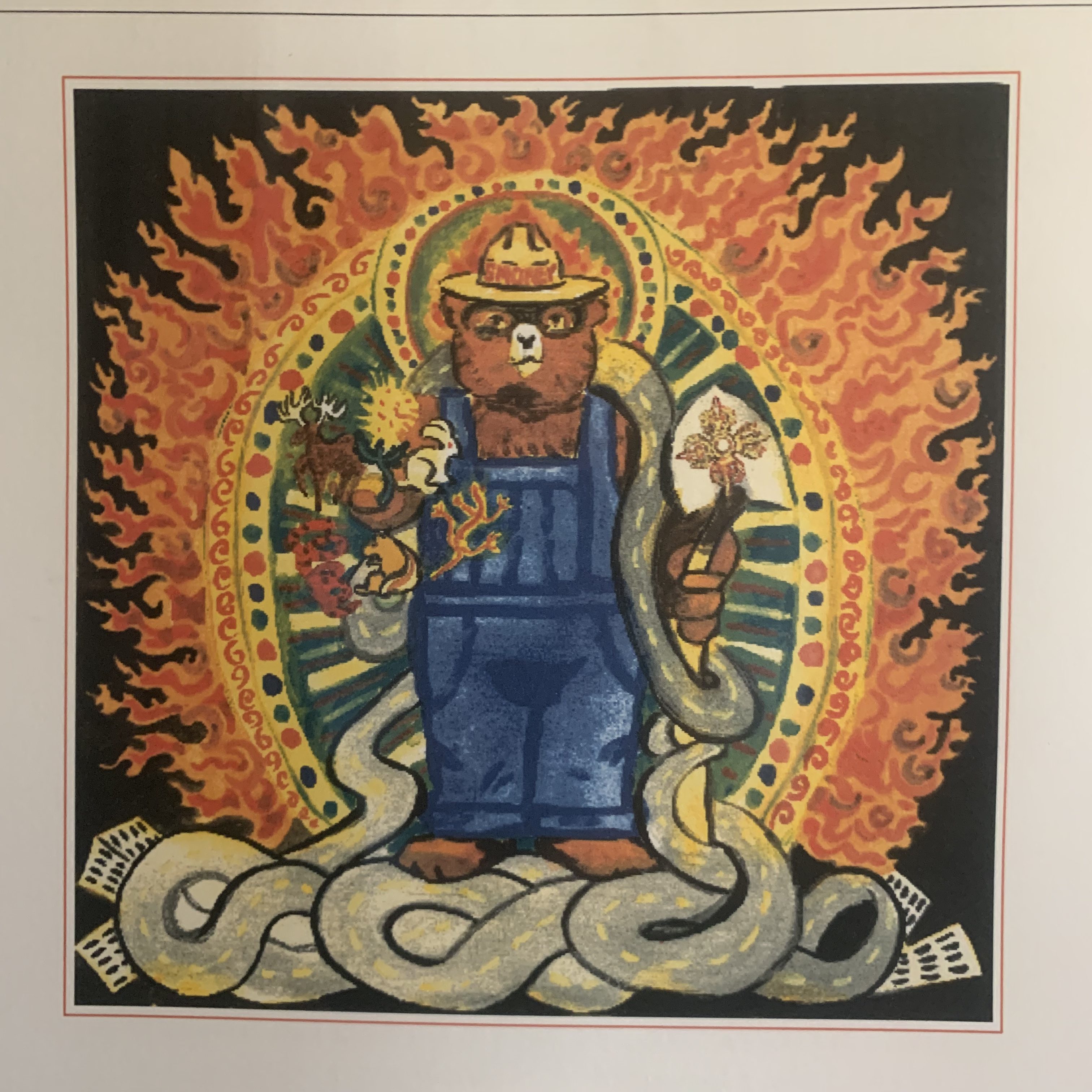 Gary Snyder’s exquisite poetry has won him numerous honors, including the 1975 Pulitzer Prize for his book Turtle Island, and the 1997 Bollingen Prize for the book-length epic poem Mountains and Rivers Without End. For many of us, Snyder is especially important for his seminal role in introducing Buddhism to the West, which he continues to promote with unsurpassed lyricism, clarity and common sense.

Gary Snyder’s exquisite poetry has won him numerous honors, including the 1975 Pulitzer Prize for his book Turtle Island, and the 1997 Bollingen Prize for the book-length epic poem Mountains and Rivers Without End. For many of us, Snyder is especially important for his seminal role in introducing Buddhism to the West, which he continues to promote with unsurpassed lyricism, clarity and common sense.