Elegy for a Glacier

Dig Tso is a glacial lake high in the Himalaya of Nepal. On a summer afternoon twenty years ago, the lake’s waters burst from their bowl of ice and rock. An inland tsunami flooded the valleys below, sweeping away potato fields, yaks and a partially built hydropower plant.

It was a Buddhist festival day in the Sherpa village of Thamo. Thamo’s residents are members of a tribe that came over the mountains from nearby Tibet 400 years ago to settle the region known as the Khumbu, below what we call Mt. Everest. People were drinking a bit, laughing and having fun. At four o’clock in the afternoon one woman, standing on a ridge above the Bhote Kosi river, heard a sound like the roar of a jet engine, then felt the ground begin to shake. The woman screamed to the other villagers, who came down to see a wall of water approaching from upriver. Those who lived on the slope closest to the river ran into their houses, grabbed religious items—portraits of monks, statues from family chapels, Buddhist texts—along with leather trunks holding money and family jewelry. They ran uphill to neighbors’ houses and waited, while others carried portraits of gods and goddesses down to the riverbank and pointed them at the advancing flood, pleading for the river to change its course.

Elderly men and women in Thamo and nearby villages believe they know why this flood happened. They say a Sherpa man was tending his yaks in the high, sparse pastures near Dig Tso that August. The morning of the flood, a stray dog ate the man’s bowl of curd. The herder was so angry he grabbed the dog, tied its legs so it couldn’t swim, and threw it into the lake. The act of cruelty angered a local deity, who caused a piece of the glacier to break off and fall into the lake. The water surged out.

There were no human casualties in the Sherpa villages high in the Khumbu, but lower down the channel, people drowned in the churning river.

I heard this story last April, just a few days before I joined up with a pair of Nepali hydrologists who are trying to gather precise data about how much the vast glaciers in this part of Nepal are shrinking.

It was my second extended stay in Nepal in the past two years. Rather late in life I became a radio journalist, and as I homed in on environmental stories, rivers increasingly fascinated me. In the Khumbu late in 2003, I saw the cloudy aquamarine waters of the Dudh Kosi, or “milk river,” cascading over boulders the size of small houses and as white as sun-bleached skeletons. The river’s power awed me. I was hooked. And I found a way to return.

The first time I went to the Khumbu I was doing interviews for a story about how hydropower came to villages nestled 12,000 feet in the Himalaya, changing life and tourism there. That’s when I heard about the Dig Tso flood that wiped out the half-built electric plant, and about a phenomenon called “glacial lake outburst floods.” The general warming of our planet is causing glaciers to melt, and that has created dozens of lakes like Dig Tso in the Himalaya, held in by relatively fragile natural dams of rock and ice.

The hydrologists’ explanation of Dig Tso’s bursting in 1985 differs somewhat from that of the Sherpa farmers. No dog, no yak herder, no deity caused a piece of the steep, hanging glacier above Dig Tso to break off and slide into the lake. We did.

If you sit for a while on the ridge above Gokyo village, more than 16,000 feet above sea level, from time to time you can hear the ice crack—like an ice cube popping in an enormous summer drink. The Ngozumpa glacier is easing its vast bulk down the wide valley it has carved over the millennia.

The glacier is not white and pretty like some. The young mountains of the Himalaya shed huge amounts of sediment, so glaciers are often covered with rocks and gray grit. That’s partly why they’re melting faster than glaciers in other parts of the world: they absorb more heat from the sun.

But the Ngozumpa is still magnificent. It stretches as far as I can see up and down the valley. I’ve been tagging along with the two Nepali hydrologists to look at glacial lakes and glaciers for sixteen days of hard walking in this rugged, thin-aired landscape. They note that there seem to be more pools of melted ice in the Ngozumpa than there were a few years ago. The pools are like enormous pockmarks in the rumpled skin of the glacier, often rimmed by exposed ice.

One of the hydrologists adds that even if greenhouse gas emissions stopped today, the course is set; the warming—and the melting—will continue. Curb emissions, as much and as soon as possible, of course. But we must prepare for the changes to come. For example, at one glacial lake in Nepal a siren has been installed. It would warn villagers below to head for higher ground should the lake’s moraine dam burst. At home in California, officials in Sacramento have been talking for years about what less snow in the Sierra will mean for our already precariously balanced and massively engineered water system.

The day I fly out of Lukla there is a fresh dusting of snow on the mountains ringing this scruffy, touristy village. It exists chiefly as a portal from Kathmandu to the trails of the Khumbu.

Half a century ago, about the time increased greenhouse gases in our Earth’s atmosphere began to cause the temperature rise that created more glacial lakes up here, the only way to travel between Kathmandu and the Khumbu was on foot, for several weeks.

That day I was among the lucky few to get a seat on one of the noisy little planes that buzzed up the short, tilted, mountainside runway. My heart thumped as we buzzed back down the slide and off it, suspended in the air above steep wooded hillsides. Half an hour later we landed in Kathmandu. The mighty mountains had vanished, obscured by air filled with diesel fumes and dust kicked up by cars on unpaved streets. Yet the filthy air of Kathmandu plays a minuscule role in what is happening to the rivers of ice 20,000 feet above us. Cities far from here are the ones causing the ice to retreat.

Back in Oakland a month later I see intense blue sky again despite the swirl of large speeding vehicles. The wind blows California’s controlled emissions inland. I venture out, not having driven a car in five months. I turn my head to gawk as a Hummer cruises past me. Then I just laugh, less inclined to judge than I have been in the past—some combination, perhaps, of age, Buddhist practice and trying to be a balanced journalist.

Yet I feel sad; for here in clean, opulent California I see no more little tikka-smeared shrines, no stupas, no prayer wheels to turn. The deity in this part of the world is an internal combustion engine, and everywhere I look are its shrines: the wide asphalt streets, parking meters, gas pumps, even the narrow garage beneath my almost century-old shingled house speak to me of this deity’s enduring power.

And I think with a pang: turning the key in my Toyota’s ignition links me in ways I don’t want to be linked to that faraway frozen landscape I love and hope to see again. I will be long dead when the icy mystery of the Ngozumpa glacier melts, if it must. But I will have done my share to dissolve it, as surely as if I’d broken off a chunk or two and plopped them in my glass to cool a summer drink.

One day up in the Khumbu I had talked with a weather-beaten man named Ang Purba Sherpa, who was planting potatoes with his wife. His creased, sunburned face was framed by a well-worn blue knit cap bearing a popular American sports logo. He had lost his house and potato fields in the 1985 Dig Tso flood. They went down the river with the dead yaks and presumably one drowned dog.

Ang Purba, whose son is a Buddhist monk, said Tibetan scriptures prophesy the melting of the glaciers on the passes between Nepal and Tibet. This will be bad, he said, for the universe. When he was young, Ang Purba walked on ice as he crossed those passes. Now, so he hears, there’s only earth and rock. 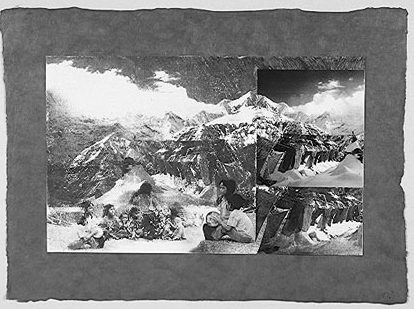 Cheryl Colopy is the author of Dirty, Sacred Rivers (Oxford University Press, 2012). A former environment reporter for KQED public radio, she has won a number of awards for her coverage of land use, rivers, endangered species and other resource issues, as well as welfare reform and education. She has been interested in Buddhism and practicing vipassana since the late 1980s.

Mary Curtis Ratcliff is an artist who lives and works in Berkeley, California. Her work can be viewed at the San Francisco Museum of Modern Art Artists Gallery, ArtScape Gallery in Walnut Creek, California, and online at HealingCircleArtworks.net or MaryCurtisRatcliff.com.

Cheryl Colopy is the author of Dirty, Sacred Rivers (Oxford University Press, 2012). A former environment reporter for KQED public radio, she has won a number of awards for her coverage of land use, rivers, endangered species and other resource issues, as well as welfare reform and education. She has been interested in Buddhism and practicing vipassana since the late 1980s.

Mary Curtis Ratcliff is an artist who lives and works in Berkeley, California. Her work can be viewed at the San Francisco Museum of Modern Art Artists Gallery, ArtScape Gallery in Walnut Creek, California, and online at HealingCircleArtworks.net or MaryCurtisRatcliff.com.