This May I received the Kalachakra empowerment from His Holiness the Dalai Lama in Toronto, along with about 5,000 other people. Nowadays, demonic forces seem to be afoot, fattening on human greed, ignorance and hatred, and it felt urgent to attend this event dedicated to world peace.

But Kalachakra was dauntingly complex, I knew. Though the initiation is offered to large crowds with-out requiring everyone to visualize the whites of 722 deities’ eyes, I didn’t want to sit there blankly, as though I were attending a seminar on toric topology. If it’s true that Kalachakra brings on the utopian era called Shambhala, I wanted to take as full advantage as possible of whatever His Holiness was offering. If I didn’t think Kalachakra truly made a difference, I shouldn’t waste time by going.

So I invested a small fortune in books, hoping to plow the dry ground of my understanding in case a seed of possibility might fall there.

I was shocked, amidst the intricate teachings, to come across an apocalyptic prophecy. (It is discussed at length in Alexander Berzin’s Taking the Kalachakra Initiation and Geshe Lhundrub Sopa, Roger Jackson and John Newman’s The Wheel of Time: The Kalachakra in Context. What follows is culled from those sources.)

According to Kalachakra, our world situation will deteriorate steadily until a global war in 2424, a cataclysmic struggle of civilization against barbarian fanatics. The barbarians will have taken over all of India. Their holy city is Mecca, their mantra Vishvamila, from the Arabic Bismillah, in the name of Allah. In short, they’re Muslims of some stripe. But what distinguishes a barbarian is not being Muslim per se. It is a belief in violence. Barbarians say, “There is no fault in one who would do ill to a vicious beast” (Wheel of Time, p. 60).

During the ensuing horrible war, a bodhisattva hero arises; his army eventually wins out on behalf of gentler religions. Some say he’s from the north, around Turkestan; others that he’s from a symbolic inner world. His forces consist of everything from battle-mad elephants to flying ships. Those who’ve taken the Kalachakra will be reborn among the good guys; an era of peace and wisdom ensues from their victory.

I struggled with all this. Unlike anything I’d come across in Buddhism, it sounded more like Nostradamus or Revelation. So far, I’d been comfortable with Buddhist descriptions of the universe, whose cyclic eons of degeneration, emptiness and remanifestation fit with current astronomical theories. But though the Kalachakra’s war prophecy still falls within the vaster scheme, its timing is fairly immediate—and its destruction historical and human rather than cosmic and mechanical.

Only a few more rebirths to go! And what about that savior figure—we need him now! But aren’t Buddhists responsible for saving themselves? And how was I responding to a prediction that the barbaric enemy is Muslim? Prophecies are like book reviews—you need to see who wrote them, and take apart your responses, before starting to take them literally.

The Kalachakra arose in the historical record in ninth-century Afghanistan. A violent Muslim sect was attacking peaceful caliphs at Baghdad and tearing apart communities where religions, including Buddhist, coexisted in harmony. Berzin suggests that Kalachakra may first have been offered to large, diverse groups as a spiritual emergency measure to re-create sacred bonds. Other elements in the Kalachakra, like its astrological imagery, seem absorbed from Persian and other sources. Perhaps the very notion of an end-time, and a messianic savior, is a product of cultural interchange.

So maybe the Kalachakra redactors projected their own issues into the future. As for my own reaction, current world difficulties involving Muslim fanatics clearly added to the prophecy’s emotional impact. An overall sense of crisis and uncertainty lends itself to apocalyptic thinking. We’re fighting a war whose end is not in sight. Propaganda—on both sides—fabricates mutual enmity so that negotiations fail and understanding seems impossible. One can feel that a long, slow worldwide disaster is under way, a creeping apocalypse that may become irremediable far sooner than 400 years. But the lines between good and bad guys are not so clearly drawn.

Of course, the prophecy is symbolic, describing a battle between ignorance and understanding in every person, every practitioner. Greed, hatred and delusion are the real enemies, expressed in the human tendency to perpetual war. Yet to cite the symbolic level doesn’t wash away the need to approach the literal intent. Was it only a sense of dread and collapse that made me willing to think this prediction could come true?

If 400 years seems a long time for current troubles to continue, past Muslim/Buddhist clashes have recurred for far longer. Muslims cut down the original bodhi tree and killed off Indian Buddhism in the thirteenth century; they desecrated the Silk Route murals amidst bloody violence around Padmasambhava’s time; and they shot apart the Bamiyan statues in 2002. It hardly seems impossible for India to become all-Muslim (fanatical or not), nor for a large-scale conflict to occur with a counterforce striking from the north, in 400 years. If a prophecy of flying ships sounds far-fetched, aren’t flying ships already a preferred war weapon?

Islam is not the only possessor of a potentially violent ideology—Christianity has its Inquisition and Crusades, plus its own virulent fundamentalism. Over 100 million died in wars during the twentieth century, many under the belief that certain “races” or social classes must be killed. The enemy is ignorant violence, no matter who is justifying it.

And the current world crisis seems, at root, to be a struggle against the will to ignorance and a fear of change—on all sides. If intolerance cannot be defeated, if education and material well-being can’t be distributed more fairly, we will all suffer for many centuries to come.

For solutions, we might return to the Kalachakra, of which the prophecy is only a tiny part. It offers a history of the universe, plus a map to eliminate the causes of all wars.

Kalachakra is Sanskrit for “Wheel of Time.” It has three levels. To sum up drastically, “outer” Kalachakra is the universe, space and time; “inner” Kalachakra, the body, mind and subtle channels; “other” Kalachakra, the enlightened Buddha-mind which allows the transformation of the other two. When all three come together, yogis emanate innumerable empty Buddha-bodies for the benefit of all, and the era of peace arrives when just about anyone can attain enlightenment easily.

This can happen anytime—in the timeless time of meditative attainment as well as the intersecting historical, sequential time of causal relations. In Kalachakra, both are equally important. Kalachakra cosmology is said to be supreme in Buddhism; I think it is unique, as well, for beginning to approach historical time.

Lacking omniscience, I have no idea what will happen, just as I didn’t foresee how, during the Kalachakra initiation, I’d be sitting yards from His Holiness as he did his own practice. This extraordinary man, still doing his best with a violently altered life, looked tiny in the enormous auditorium. Yet by his example he’d brought 5,000 people together to try to work a change. Wrapped in the heavy, dissonant Tibetan harmonies of monks’ chant, I found it possible to hope that goodness might prevail.

It’s really true that we see the world all wrong, and that’s why we suffer. It’s the most basic teaching of the Buddha, but of course—because we see the world all wrong—it’s probably the hardest to digest. On all levels, if we don’t seek real solutions now, our problems won’t just go away. They’ll persist, they’ll recur, they could bring our world to ruin. Why can’t we end war now, without needing to foretell the war to end all wars? 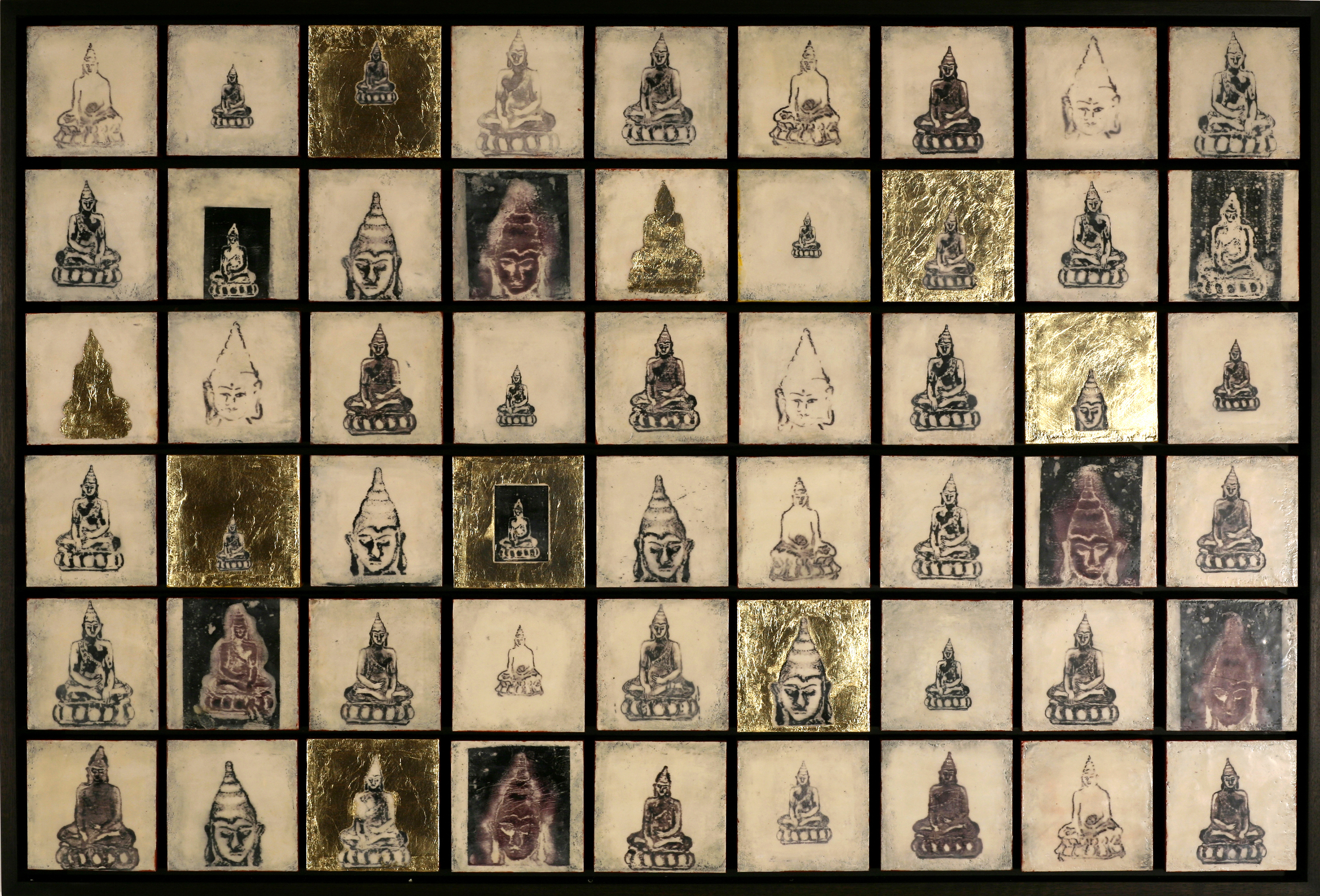 Kate Lila Wheeler is a writer and meditation teacher who lives in Somerville, Massachusetts. She is the author of Not Where I Started From (Houghton Mifflin Harcourt) and When Mountains Walked(Houghton Mifflin Harcourt), and editor of an anthology of Buddhist fiction, Nixon Under the Bodhi Tree (Wisdom Publications). She was ordained for short times as a nun by Sayadaw U Pandita in 1991 and 1998.

Kate Lila Wheeler is a writer and meditation teacher who lives in Somerville, Massachusetts. She is the author of Not Where I Started From (Houghton Mifflin Harcourt) and When Mountains Walked(Houghton Mifflin Harcourt), and editor of an anthology of Buddhist fiction, Nixon Under the Bodhi Tree (Wisdom Publications). She was ordained for short times as a nun by Sayadaw U Pandita in 1991 and 1998.