JOURNAL OF THE        VIPASSANA  COMMUNITY

Decorating the Path of the Elders: Western Teachers Give the Theravada a Facelift

How Is This Retreat Different from All Other Retreats?: Organizing Meditation Practice for Non-Jews

Sitting on Top of the World: Buddhism in the Arctic

Practice Page: Cooking Mindfully with Pasta:
How the Shape of Your Noodle Can Affect Your Practice

Panting and Purring: Anapanasati for Pets

4th Characteristic Found: Unusual discovery by Buddhist anthropologists during a dig in Chan state, Northern Myanmar. The story of an essential insight overlooked by millions throughout Buddhist history. (Newswires)

Church Council announces that Unitarians are tired of hosting Buddhists in their churches.

A Dharma Talk by Bhante Booty

Bhante Booty was born in 1949 in Sri Lanka, and legend has it that he began assuming the lotus pose before he could even walk. He ordained at age two and soon thereafter began studying with some of the great meditation masters of Southeast Asia. In 1978, he came to the United States, where he founded the Tushi Meditation Center in upstate New York, and began teaching a unique style of vipassana to Western meditators.

When I began teaching Western meditators, I immediately observed that you are always sitting down: reading, computing, talking, driving in your cars. You are always on your rear ends. Ironically, even though you are sitting down, you are at the same time usually lost inside your heads. That condition prompted me to begin teaching, almost exclusively, an ancient Theravada practice that I learned as a child, known as “getting to the bottom.”

This technique has a long history, and some scholars even say that the focus on the rear end is the entire reason for and meaning of the phrase “sitting practice.” The beginnings of this practice are, however, commonly traced to an eccentric Thai forest master who was enlightened at age twenty and thereafter never spoke except to say, “Be seated.” This instruction can be understood as referring not only to the posture but to the transformation of consciousness itself into the seat, “the place where one sits and comes to rest.”

The essence of the practice is very simple: one sits and focuses awareness on the buttocks. Are they hard or soft? Do they jiggle slightly on the meditation cushion? Do they tingle? Can you tighten them at will, or are they flabby? We also do a walking meditation in which we focus all our attention on our rear end. Does it bounce or is it swaying? I find that my male students seem more inclined to cultivate an awareness of the rear ends of others.

There is, of course, a natural progression in this practice. For instance, after a period of being aware of the gross sensations found in the rear end, students will eventually begin to notice a light appearing, usually somewhere between the two buttocks. The student should then focus on this light until it disappears. Where it vanishes to, nobody seems to know. Once a student has firmly connected the mind to the rear end and can hold it there, he or she is called a “stream enterer.” The path is not complete, however, until one becomes “endless,” which means that the rear end has disappeared entirely. Then there is no top or bottom, no inside or outside. This “endlessness” is also the end of the path, because there is, literally, no longer anyplace to sit. And that can only mean that you are finally finished meditating. “Done is what has to be done.”

Decorating the Path of the Elders 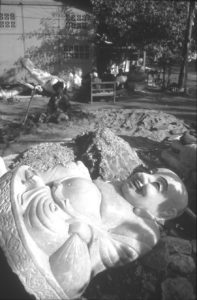 After years of hearing complaints from their students, such as “why can’t we have exciting rituals like the Tibetans,” or “Zen is way cool, but the Theravada is so, like, dull and straight,” a group of vipassana teachers has decided to enliven the Path of the Elders. As one teacher put it, “The Theravada needs a few more bells and whistles if we are going to remain viable in the crowded Buddhist market here in the West.”

To inaugurate their campaign, the teachers are hoping to arrange a United States tour for the famous Sri Lankan tooth relic of the Buddha. The Tibetans recently held a tour of their holy relics—little balls of bone or some such material traces left behind by high lamas—an awe-inspiring display that reportedly prompted some vipassana students to defect to the Mahayana. Meanwhile, the plan to tour the Sri Lankan tooth relic has raised a millennium-old debate about the authenticity of this artifact, which some Buddhist scholars say is really a “false tooth.” Whatever the case, in each city where the relic appears, senior vipassana teachers will conduct a ritual tooth-cleaning ceremony, which will include the chanting of a little-known discourse of the Buddha, the Incisor Sutra (authenticity in dispute).

A few other ideas to enliven the Theravada are also under consideration. One would require that at regular intervals during intensive retreats all yogis be asked to take part in a circle dance symbolizing the endless round of rebirths. Another new ritual under consideration requires that whenever mentioning one of the numbered lists (the Four Noble Truths, the Three Characteristics, the Seven Factors of Enlightenment, etc.), that teacher or yogi must hold up the requisite number of fingers while singing the complete list in Pali. Those teachers who can’t hold a tune do not support this idea, however, since it may render many of their popular dharma talks too discordant for further use.

Another plan inaugurated by the teachers group to enliven the Theravada is to hold a ceremony every few years to declare certain Western vipassana teachers as official “elders.” This suggestion has also not yet received final approval due to the teachers’ difficulty in agreeing whom to name as elders. Their deliberations have been delayed, as those who consider themselves candidates have filled all available time at teacher meetings reciting their litanies of bodily complaints in an attempt to demonstrate their true elder status. One criteria the group has been able to agree upon is the ability to fall asleep while leading meditation sittings and not look guilty upon awakening. As soon as the first group of elders is chosen, the initiation ceremony will include a presentation of gifts: a pillbox in the shape of an almsbowl, an “elder” zafu equipped with adjustable seat and optional wheels, and a pair of mirrored sunglasses. In fashioning the remainder of the elders ceremony, a number of students have requested that no dharma talks be allowed.

The teachers group welcomes suggestions from the sangha for any additional ideas to enliven the Theravada tradition, but they wish to let people know that uniform-colored clothing or special hats are not options.

Don’t Sweat the Chicken Soup is a heartfelt, loving, luminous, purgative book, and a major contribution to the understanding of our essential beingness. According to Smoltz, who has done extensive work on the healing power of sweat glands—and has worked in both sweatless New Age kitchens and sweaty Old World kitchens—what we all need to do is let the sweat come out but without our usual identification with it. It is not our sweat; it is the sweat. Sweat happens. If we simply “don’t sweat the sweat”—and instead embrace it, feel it trickling down our face and body without wiping it away, “licking it and loving it,” as Smoltz says—then we will take in the essential salt of our own earthiness, returning to our true home and tasting it for the first time. We come away from this book believing that it is indeed possible for each of us, even you, to be healed, marinated and cured, and to live a happy, fulfilling life in spite of the dampness on our brows, upper lips and armpits.

Along with teaching us the true meaning of sweat, this wonderful, moving, enlightening, transformative book tells us what we have all been longing to hear: “It’s all chicken soup.” All of it! If we understand our lives in this way, then the entire universe becomes a warm, soothing liquid like your mother used to make. The proverbial ocean of bliss is nothing less than the ocean of chicken soup, and we are all like the pieces of carrot or celery floating on the schmaltzy brine. If you can turn pages, you should read this book, and along with all the sages of all the ages, realize that there is really nothing to sweat, especially if it’s all chicken soup.

The National Meditational Championship was recently held in Butte, Montana. The Tibetan team, the Dzogchen Dzodgers, headed by Rinpoche Tenzin Norbu and Tulku Norbu Tenzin, was disqualified when they got lost in the Bardo en route from L.A. and showed up in their rainbow bodies. “Free Tibet,” they commented. Shari Goldfield, last year’s champion from the Sati Hotties team, was just back from a year of training in Burma. Her team finished a disappointing second this year, as they were too busy doing the laundry. “Keep the faith! It’s all One Dharma!” shouted the crowd. S. N. Goenka’s strongly determined team, with great patience and persistence, won the sitting competition. However, they failed to capture the overall title after withdrawing from the walking competition. Zen Master Bob, coach of the Shikantaza Shiksas (a very small team), when told that his team was declared the winner, commented: “Cherry blossoms bloom in the spring. I can’t believe it’s not butter. Plop.”

This weeklong meditation retreat will follow the usual vipassana schedule, except that we will be doing our practice underwater. Enjoy easy awareness of breath as its sound becomes amplified through your oxygen mask. Get in touch with your inner fish as you move through the water element, watching the literal “flow of phenomena.” Walking meditation will be done on the ocean floor. Teachers are certified scuba instructors as well as vipassana teachers. For more information write to: Ocean of Bliss, Maui, HI 84567

Photograph © Jeff Greenwald. Up to their old tricks at the Nga Phe Kyaun, on Inle Lake, Shan State. Used by permission.

Oakland-based photographer Jeff Greenwald is the author of the bestsellers Shopping for Buddhas, The Size of the World and Scratching the Surface. He is executive director of Ethical Traveler, a global alliance of travelers dedicated to human rights and environmental protection.

Oakland-based photographer Jeff Greenwald is the author of the bestsellers Shopping for Buddhas, The Size of the World and Scratching the Surface. He is executive director of Ethical Traveler, a global alliance of travelers dedicated to human rights and environmental protection.