The Birth of a Meditation Cushion Salesman

When I first met Linsi Deyo she was busy crafting funny round meditation cushions she called zafus. I was impressed. Here was a woman who had found a trade to employ herself in a rural Appalachian community where most of the rest of us were commuting to the nearby city of Asheville. Little did I know she would become my wife and business partner, and that I would become a meditation cushion salesman.

Really, we were a good match because we shared a similar quest. Linsi and I both subscribed to the same credo—that our society’s economic climate, which exploits people and the environment to produce profit for stockholders, is in need of reform. I had always wanted to create a right livelihood—a business to support my rural lifestyle, provide a meaningful service to the community, and be pollution free. I wanted to be a part of the “green business” movement, which promotes ethical and ecological business policies and practices in order to create a more just and sustainable world.

Unfortunately, neither Linsi nor I had the knowledge or resources to effectively run a business or tap into the booming new market of green consumers. We were well-meaning, idealistic, social and environmental revolutionaries and artists who wanted to merge our ideals with our livelihood. Instead of having worked toward a standard career, we had spent years learning how to live sustainably: to grow vegetables, bicycle for transportation, cultivate inner awareness, recycle, boycott rapacious corporations, and participate in local environmental groups.

So how could we maintain this lifestyle and make a viable living? Can they go together, or must one sacrifice sustainability while at work in order to support sustainability while at home? How does one operate in the market economy with nonviolence? How does one make a living without supporting a system of destructive resource use and dysfunctional social practices? These were our koans.

One of our early lessons came the day the electric man knocked on our door with a “collect or disconnect” order. Our $7,000 per year income wasn’t paying the bills. Without money, even a green business cannot survive. The only answer was to sell more cushions. Our friends felt sorry for us and offered much advice: “Why don’t you sell them at football games? They would be great for those hard stadium seats.” Everywhere we went we were dreaming up ways to sell more zafus. We even considered bumper stickers: “Carolina Morning Designs: Your One Stop for Enlightenment.”

But the whole idea began to feel a bit too much like capitalism, which I thought of as the opposite of Buddhism. Wasn’t ours supposed to be a noble right livelihood? Wasn’t Buddhism—and our business—a sanctuary from the market economy in which one is bombarded with messages to “buy this” or “eat here”? We wanted to promote our cushions without encouraging materialism and competition against other companies who were also trying to “do good.”

And so we became fascinated with the world of money and business. Perhaps if we could master it, it would somehow become friendly. We might even unravel a mystery to open our minds and create a dramatic shift in consciousness. As we began this exploration, we learned that even a green business needs to make use of many of the same procedures and principles as a standard business. Just because we “do good” doesn’t mean we will automatically do well. We decided that if we didn’t learn (ugh!) how to manage our business and money, we might as well go find regular jobs. Number crunching, marketing and advertising, systems design and analysis—these were the things we had to learn.

The E-Myth was a book that helped us gain this perspective. Author Michael Gerber describes the E-Myth as the belief that an entrepreneur is simply someone with a great idea and the skill to create and market it. What is overlooked, according to Gerber, is that running a business takes management skills. We were a case in point. Cushions and materials and papers and equipment were all over our house, porch and barn. Our bills were often paid late with stiff fees, and our taxes were never filed on time. We could never keep up with, much less increase, our orders. We didn’t have a profit and loss statement (we barely knew what one was), so there was no way to analyze anything about our business in order to make informed decisions. We could not even afford a small vacation. Pitiful.

So we put in hours and hours quantifying, measuring, researching, projecting, imagining, fixing and systematizing everything from inventory and production to marketing and hiring. One of the first things we discovered was that we had netted only around $12,000 that year. We wondered if it was all worth it. So many years of our lives were invested in building a dream that wasn’t sustaining us, and wasn’t fun anymore. In trying to create a better world, we had created a very stressful and unstable life—the opposite of our ideal.

For hard times, there is no better place to turn than the very Buddhist teachings we were promoting through our cushions: that suffering exists, that it has a cause, that liberation is possible, and that there’s a way to get there. It took great strength to accept the suffering of our circumstances without becoming bitter, blaming ourselves or indulging in self-pity. We had worked ourselves into a predicament, and now we’d have to tread the path to get ourselves out.

Being dedicated to making our chosen lifestyle work, we relocated to a different community where some friends allowed us to build a tiny, movable house on their land. We rented a cheap building nearby to run the business. We worked side by side to pull Carolina Morning Designs out of the tangled mess it had become. Now that we had accepted the notion of a market economy, we were ready to participate in it. Learning how to operate in such a world without becoming a thoughtless part of it would be so much more meaningful than deciding we could never fit in with the way things are and forever living a life of resistance and regret.

There is always the possibility or hope that a business will “take off,” a.k.a. The Great American Dream. For us, extreme wealth is not the aim, nor is extreme poverty or struggle. But business is unpredictable and could go either way. So how does one maintain a sense of equanimity when the future is so uncertain? Perhaps entrepreneurship really is anti-contemplative. But business could also be seen as the supreme practice, providing an opportunity for understanding impermanence and meeting one’s projections head on.

Eventually, our efforts paid off. The blossoming of the Internet allowed us to achieve visibility without vast advertising resources, which we didn’t have. By the time the orders started rolling in, we were ready; we had built up our infrastructure and production. Carolina Morning Designs finally emerged as a lotus out of the muck of personal struggle. Today we employ ten people, all of us able to maintain a rural lifestyle in a place where most residents commute. Perhaps the biggest achievement is the simple act of living where we work, which has allowed us to plant gardens, bicycle to work and create community.

But this is not exactly a rags-to-riches story, the kind that fascinates so many people. This is a story about looking at money and the lack of money, and learning not to identify with or cling to either. It is about two people’s quest for right livelihood and their coming to terms with the way things are, about developing present-moment awareness and practicing it in the experimental arena of work. 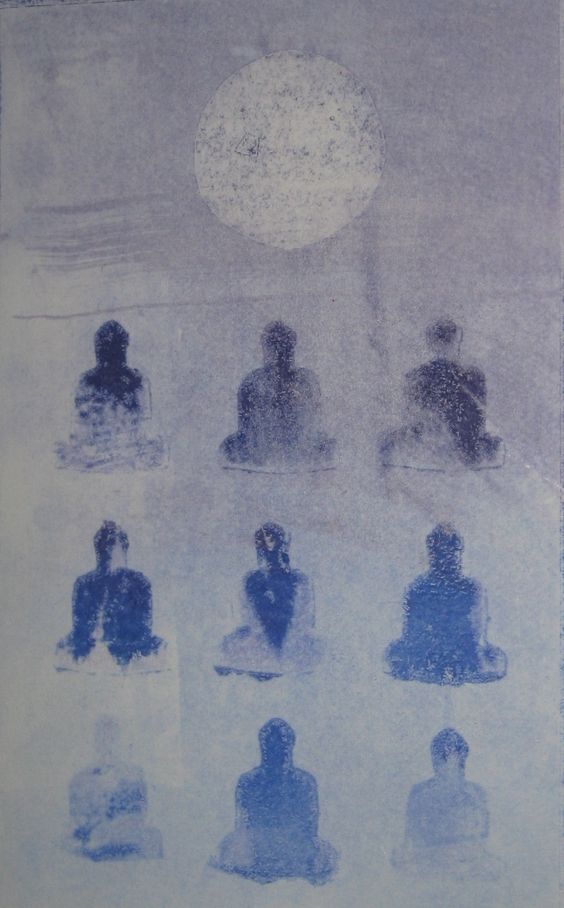 Patrick Clark plays his banjo, gardens, writes or meditates when he’s not selling meditation cushions. He lives in Celo, North Carolina. You can visit Carolina Morning Designs at www.zafu.net.

Patrick Clark plays his banjo, gardens, writes or meditates when he’s not selling meditation cushions. He lives in Celo, North Carolina. You can visit Carolina Morning Designs at www.zafu.net.