We modern followers of the dharma face much the same human condition that the Buddha confronted on his path to freedom. For us, however, the path is usually filled with cars going very fast, and all along the way billboards flash messages meant to stimulate our desire. In contrast to Aldous Huxley’s Island where the birds fly overhead crying, “karuna, karuna (compassion, compassion),” almost everywhere we turn in our world we hear birds of prey chanting the message “tanha, tanha (desire, desire).”

In this Inquiring Mind we explore the cultural pressures that confront modern practitioners of dharma, in particular the speed and greed of our society. These are the very pressures—powerful and pervasive—which may have propelled many of us to seek the Buddha’s teachings in the first place, and yet these same obstacles to happiness and liberation remain a daunting presence in our daily lives.

The issue begins with an essay by Stephanie Kaza, professor of environmental studies at the University of Vermont, who examines the consumer identity through the Buddhist teachings on the twelve limbs of codependent origination. This is followed by an interview with writer and activist Kalle Lasn, who is working to help us all relinquish desire through his magazine Adbusters: A Journal of the Mental Environment and through events that he calls “culture jamming.”

The speed and greed of our culture has been fueled by a seemingly endless proliferation of new technology without much thought as to whether it will contribute to the greater happiness or well-being of humanity. Diana Winston, one of the younger teachers of dharma in the West, raises some questions about one of our favorite techno toys, the Internet, and its effect on our minds and hearts. Buddhist monk and translator Santikaro Bhikkhu juxtaposes the new technologies with the ancient technology of breathing in and out—fun, cheap, simple and conducive to liberation.

If you are looking for a hit of hope, read Joanna Macy’s inspiring story about visiting Sri Lanka after a cease-fire in the civil war between the Tamil Hindus and the Sengalese Buddhists. She attended what she describes as the largest meditation session in history. The Maha Shanti Samadhi Day was put on by the Sarvodaya movement, which also has an inspiring 500-year plan for turning Sri Lanka into a paradise on Earth, a model of a peaceful, poverty-free world.

Sharon Salzberg’s interview on her new book, Faith: Trusting Your Own Deepest Experience, reminds us of our capacity for an active, adventurous sense of connectedness beneath all the pressures of speed and greed which separate us from ourselves and one another.

We hope this issue of Inquiring Mind will inspire further investigation into the social roots of suffering. As we deepen our understanding, perhaps some of those who follow the dharma may find we can be of greater service in a world that seems in many ways to be headed increasingly in the wrong direction.

A note about what is and is not available here today…

For budgetary reasons, we are focusing on archiving Inquiring Mind’s original articles, interviews and poetry. We are not including pieces that were adapted or excerpted from books.

For that reason, the following articles from this issue are NOT in the archive:

“Land of the Free” and “Depression Party,” both by Nina Wise, were excerpted from A Big New Free Happy Unusual Life (Broadway Books, 2002).

“Culture Jammers’ Manifesto” and “Hype,” both by Kalle Lasn, were reprinted from his book Culture Jam (Harper Collins, 1999).

“What a Long Strange Trip It’s Been” and “The Name of the Age,”both by Marty Glass, were excerpted from Yuga: An Anatomy of Our Fate (Sophia Perennis, 2001)

If you wish that these excerpts were in the archive, let us know—and, perhaps, consider making a donation to help us continue growing and expanding the archive. 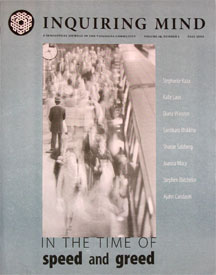 Our Fall 2002 cover features Robin Brandes' digital photo-illustration, Metro. Brandes has been a graphic designer since 1980 and a painter since kindergarten.

Our Fall 2002 cover features Robin Brandes' digital photo-illustration, Metro. Brandes has been a graphic designer since 1980 and a painter since kindergarten.