The Wonderful Ambiguity of Art

This article is adapted from a telephone interview conducted by Laura Tennen.

Say you are a buddha and you’re free of suffering and you feel totally great—as happy as a bee and a clam and at one with the universe—and then you see all of these miserable people. Yet what good would it do for you to go and give them a big grin and a hug, or smother them with joyfulness? They’ll just get freaked out and be paranoid and say, “What does this person want?” So instead, a buddha has to develop some strategies—some art—to, first of all, open that person’s imagination to the fact that there is a world where they don’t have to be miserable all the time. And then he has to help them with a method of how to move from their paranoid corner of misery into the great ocean of the bliss of the universe that you, a buddha, perceive.

All Buddhist art is liberative art. I am using the word “art” in its broader sense, as in a college of arts and sciences, and as equivalent to the concept of upaya in Buddhism. Upaya is often translated as “skillful means,” a partly wrong, partly uninspired translation. Upaya really refers to the means by which compassion—the universal compassion of an enlightened being—manifests in action to enable other beings to find freedom from suffering. That is fundamentally what the word upaya means in Mahayana Buddhism, and that word, I think, is best translated as art.

Some kind of art—performance art, fine art, popular art, cultural art—is essential to Buddhist enlightenment. Art is really far out in the case of Buddhism, especially from the point of view of the more magical understanding of the teachings, which some might be tempted to say is the Mahayana understanding. But even the Theravada literature pictures the Buddha as totally magical, as when he appears at the Shakya Kingdom to teach his father, and he suddenly manifests as two Buddhas from a ray of light emitted from his heart, and then those Buddhas in turn manifest four Buddhas, and so on until there are millions of Buddhas everywhere you can see—which is a total piece of performance art! It’s a way to show people the all-pervasiveness of the Buddha’s enlightened power (and to cheer up his father, who was disappointed he had not become a world conqueror). That vision of infinite Buddhas was in the Theravada story, where even the arhats show their bodies turning into fire and water, or they levitate or fly in the air to go to Sri Lanka.

The point is, in terms of art, when you go into the magical aspect of the Buddha, you look at the lifetime of the Buddha and see how every breath that the Buddha draws, every gesture the Buddha makes, every word the Buddha speaks is an artistic manifestation— in the sense that none of it is driven by any sort of selfish impulse on the part of the being that was formerly Siddhartha Gautama. Everything he does is a communication of compassion to other beings, creating doorways to open up their imaginations and then their whole beings to enlightenment—to nirvana. You have to present nirvana first as a work of art, and that allows people to perceive it and opens up the possibility that they can experience it for themselves. Who would want to seek nirvana if they couldn’t imagine there was such a state of freedom from suffering?

Some modern theorists might retort that this is a very didactic approach to art, implying that Buddhist art exists just to teach Buddhism. But that’s not correct, because the Buddha is not teaching Buddhism. He is revealing the visions—that have accumulated over millennia—of enlightened beings who have seen the world in a different way and have come up with different forms of art to draw other beings into that free world, that world of beauty and of bliss. This has nothing to do with “Buddhism,” except that what people take for Buddhism is really just the concretion or sedimentation or precipitation, you could say, of what remains of what enlightened beings have communicated to others over the millennia—all of which is one continuous work of art that draws its beholder into a world of art.

This brings up an interesting paradox. In early monastic Buddhism, singing was prohibited, as was going to shows and dances. Those diversions were known to draw the mind into samsara, to palliate existence in samsara by letting one have temporary egocentric pleasures. That kind of low or mundane art was seen to heighten people’s lust, anger or confusion and prevent people from realizing that there is a much higher kind of pleasure, the sublime pleasure of freedom, of nirvana.

There’s a wonderful story you can find at length in the introduction to my book Worlds of Transformation which perfectly encapsulates the Buddhist understanding of art. It’s a story about a patriarch, Upagupta, the fourth leader of the sangha after Shakyamuni Buddha has died. Upagupta is teaching the dharma successfully in Kashmir when Mara the Devil—the Tempter—arrives with a group of demons from his devil heaven. (In India the devil lives in heaven, not in hell). The demons manifest as a troupe of actors and put on a big Rockettes-type show. People leave their dharma lessons to go to this circus, and Upagupta is annoyed because his entire audience has fled.

So Upagupta heads for the circus and pretends to congratulate the actors at the end of the performance. He offers garlands (in the Indian style), but as soon as they are around the necks of Mara and his troupe, the garlands turn into the rotting corpses of dead weasels, foxes and rabbits, and right in the midst of their curtain calls and bows, the actors themselves suddenly turn into their demonic forms (though Mara himself is rather cute, not a horned thing like a Western devil, but quite beautiful, like an elegant red cupid). Anyway, the audience is horrified. The actor-devils try to flee the stage to escape, but through his miraculous power, Upagupta holds them there in that repulsive form.

“You have to promise not to interrupt my dharma talks in the future.”

Then Upagupta says, “Actually, there is one more thing since I have you here and you are the supreme actor and a shapechanger. I was born too late to have met the Buddha, so could you please put on a little show for me as if you were the Buddha and his original apostles? Please turn yourselves into them for me.”

So Mara says, “Okay, we’ll put on a Buddha show for you, but you have to promise one thing: if you get confused when we do the show and you start thinking that I am the Buddha, then we’ll forget our pact. After all, it’s bad karma for me to impersonate the Buddha. So if you freak out, if you bow to me and start singing hymns to me, I no longer owe you any promises.”

But when Mara and his troupe come on stage, they are exactly Shakyamuni Buddha and all of the great apostles. It’s like Christians meeting Jesus to the people in this audience. So they all start bowing and freaking out. And the minute they do, the spell is broken.

Mara says, “I knew you’d break down. Tough luck! Now I’ll come and interrupt your lecture any time I feel like it. Good bye!”

That’s the story. The key thing is that worldly art is critiqued; it’s like the work of the devil keeping people away from the dharma. When you start doing art, even the devil becomes worshipable—almost like the Buddha. Of course, when you do worship the devil, you lose control of him. This story shows the wonderful ambiguity of art. For the enlightened, life is art, and for the unenlightened, art gives life.

Please do not download or copy images without the artist’s permission. 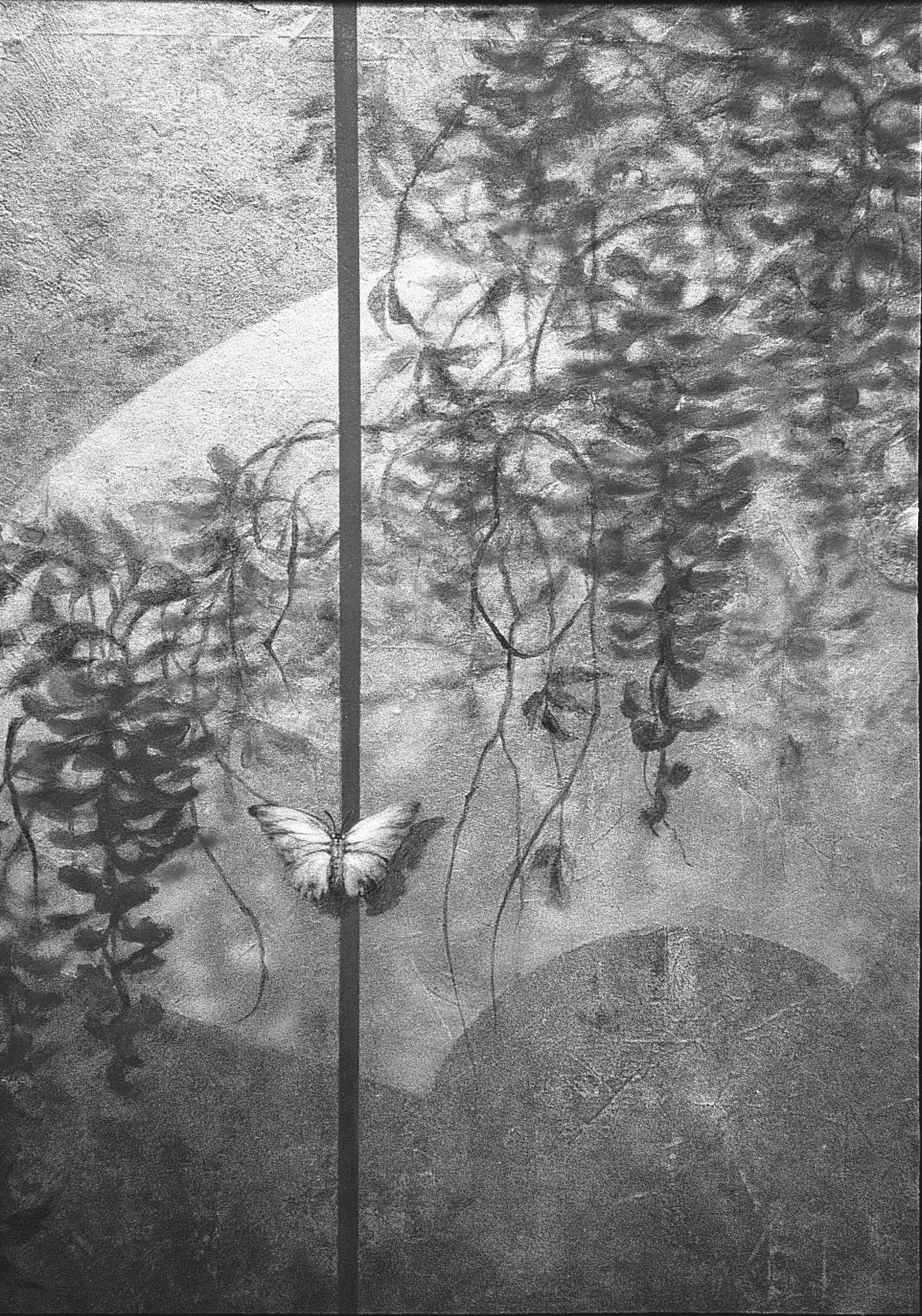 Ma Deva Padma (Susan Morgan Ostapkowicz) is a painter and mixed-media artist based in Australia. She created the Osho Zen Tarot(St. Martin’s Press, 1996) and the Tao Oracle, An Illuminated New Approach to the I Ching (St. Martin’s Press, 2003). Padma lives with her sculptor husband at their Embrace of Heaven & Earth Studio in the mountains north of Melbourne, Australia. Her website is EmbraceArt.com.

Ma Deva Padma (Susan Morgan Ostapkowicz) is a painter and mixed-media artist based in Australia. She created the Osho Zen Tarot(St. Martin’s Press, 1996) and the Tao Oracle, An Illuminated New Approach to the I Ching (St. Martin’s Press, 2003). Padma lives with her sculptor husband at their Embrace of Heaven & Earth Studio in the mountains north of Melbourne, Australia. Her website is EmbraceArt.com.