Whatever the reason, I had been ﬂattered and amused when asked to play Mara’s daughter in a children’s production about the life of the Buddha. In this play, Mara, the embodiment of greed, hatred and ignorance, is dressed as a sleazy playboy, with cigar, dark glasses and smoking jacket. As the Bodhisattva sits under the bodhi tree on the eve of his enlightenment, Mara sends his luscious belly-dancing daughter (me) to distract him.

I may have failed to entice the Buddha, but the dance sparked an ember that still smoldered in my aging loins. I remembered how good it felt to ﬂirt and dance seductively, and so, wanting more, I decided to do a really hot belly dance to celebrate my ﬁftieth birthday.

Isabel Allende published a sexy cookbook in her ﬁftieth year. She wrote, “The ﬁftieth year of our life is like the last hour of dusk, when the sun has set and one turns naturally toward reﬂection. In my case, however, dusk incites me to sin.” As for myself, dusk incited me to belly-dance, and when the opportunity arose to perform at a big millennial New Year’s party, I seized the moment. I wanted this dance to be my celebration of life, the feminine, the body—an expression of universal creativity. It would also be my one last ﬂing as the seductive belly dancer, and then I would take seriously the Buddha’s teachings about the pain of attachment to beauty and youth and slip gracefully into freedom.

I had thought ﬁfty was going to be just another birthday, but as I approached the dusk of life and my big performance, I began to reﬂect on my future options and my fading physical assets. Most of my life I had enjoyed the attention I got for being pretty and having a nice soprano voice. One of my most fulﬁlling moments had been when I starred as Maria in a high school production of West Side Story. I glowed as I danced in front of the mirror and sang, “I feel pretty, oh so pretty.” I thought being pretty was the most important thing a girl could be.

In my twenties I discovered that I could use my petite body to attract men. A love aﬀair with my Greek folk-dance teacher, who showed me how to translate the passion of Greek music into my body, led to belly dance classes and eventually my ﬁrst dancing job at a Greek nightclub, a ﬂing with a bouzouki player, and then on to the Casbah, an Arab nightclub in San Francisco.

I was small-breasted and skinny-legged, but I had learned the power of a well-timed hip drop, the allure of a graceful hand delicately poised at the brow, head tilted, smoky eyes aimed at someone in the audience. I caressed silken hair as I let my hand slide smoothly down, glancing a shoulder to perch lightly on a hip that inscribed a perfect ﬁgure eight. I enjoyed moving seductively and feeling men’s eyes on me.

I’m not sure what happened, but at some point what began as a glamorous adventure and a love of the art of Middle Eastern dance began to feel degrading. Entertaining men in a hot, smoky bar just wasn’t fun anymore. Finally, one night at 3 a.m., fully made-up and bejeweled, I climbed into the old, beat-up Dodge truck I used for my daytime job as a gardener, and said goodbye to Arab men and tourists sticking moist bills into my bra.

After I quit the Casbah I didn’t belly-dance again for ﬁfteen years. I devoted myself to my gardens and studied yoga and Buddhist meditation. As I began to awaken to my own conditioning, I saw how attached I was to looking good. For instance, I continued to wear eye makeup on silent retreats, where eye contact was discouraged. Sometimes on retreat, I even caught myself walking slightly swishy if I imagined that someone was watching. Eventually, on a two-month intensive, I gave myself the practice of not looking in the mirror, which brought me a taste of the relief that can come from not identifying with the features of one’s body and face.

I was still committed—and looking forward—to dancing at the millennial party. In order to prepare, I started taking Middle Eastern dance classes at Suhaila Salimpour’s School of Dance. At that time, the teacher, Suhaila, was eight-months pregnant, and I marveled at how she could move with such energy and control. I joined the group of young women that snaked around her mirrored studio, buoyed by the compelling rhythms of the drums. I could still move pretty well myself, and I didn’t care if I was the oldest woman in the class. Besides, I told myself, this was strictly about fun and exercise.

Suhaila’s classes weren’t like the belly dance classes that I had taken in the past. We didn’t swish chiﬀon veils, and we didn’t bounce, thrust or shake wildly. In the interests of creating a unique and artistic American belly dance form, Suhaila had us practice control. We learned how to isolate our “glutes,” quickly squeezing and releasing one buttock and then the other to facilitate precise hip movements. Our upper-body undulations were distinct from our lower-body undulations. We practiced “layering,” fast hip shimmies with smooth rib-cage circles on top. I loved the challenge and the restrained passion, the circle of hip or torso exuding possibility.

I became so drawn to these dance classes that I left a ten-day meditation retreat where I was teaching yoga to enter Suhaila’s hot, humid inferno where beautiful young women in tights and work-out bras gyrated to the beat of a Lebanese techno-rock band.

Yet even though the dancing made me feel young and sexy, sometimes after class I would become sad or agitated. I realized that I was having fantasies about dancing in a nightclub again, but then, suddenly, I would remember that I had undependable knees, frequent backaches, and wrinkles in my cheeks. Perhaps I would be better oﬀ putting my energy into some other pursuit. Meanwhile, the New Year’s party was fast approaching. I was wavering about belly-dancing in front of my friends but didn’t want to back out of my commitment. Finally, the day arrived. As I stood in front of the dressing room mirror, I pinched the ﬂesh on my exposed belly and heard myself say aloud, “Cellulite! Oh well.” I applied a ﬁnal bit of hair spray to guarantee that my short hair looked rumpled and sexy, like I had just gotten out of bed. I was wearing a leopard-print see-through T-shirt that revealed a black padded push-up bra underneath. Twenty-inch black fringe swished over a silver skirt carefully slit to reveal bare legs.

I heard the emcee announce, “And here she is.” I evoked hoots and hollers as I entered the crowded room. I had prepared well but still suﬀered the pre-performance pain of hope and fear. Will the audience see the greatness of the dance? The greatness of the body? My greatness? I longed for perfection.

The music started and stopped as the DJ ﬁddled with the sound. I started again. I had painstakingly choreographed this introduction but now became rattled. My ﬁrst turns were tentative as I felt my high heels slip on the hardwood ﬂoor. I hadn’t worn heels for ﬁfteen years.

But then the music picked up and everyone cheered. In an instant I was back, gone, in the “zone,” Mara’s daughter in her fullness. A man rose from the front row and came to me. He tried to tuck a bill into my sequined hip wrap. I remembered that this was something I knew how to do. Playfully I wove my shimmying hip, moving so that it was challenging for him to complete the tuck. He managed, and I beamed at him and took oﬀ. I began to abandon all choreography, improvising with the different currents of the music, punctuating with a hip drop, a quick undulation of the spine, a subtle toss of the head. Hips responded freely to the underlying beat while the upper body was expressive, mirroring the ﬂuid melody. Spine rippled up to down, down to up. Interior hip circles created intrigue. Where would it go next?

After the performance I soaked up the compliments from both men and women. Several women thanked me for “honoring the feminine.” I felt aﬃrmed when one said that the dance immediately made people feel happy. The highest honor came from a young woman who described my dance as “awesome.”

I felt light and happy until later, when I watched the video of the performance. The dance seemed to lack pizzazz: the music called for faster shimmies and more ﬁery turns. Forgotten were years of work trying to “correct” rounded shoulders and sunken chest. I saw life’s difﬁculties reﬂected in the carriage of the little dancer on the screen. As I continued to watch the moving black-and-white image of myself, embarrassment and disappointment ﬁnally began to soften into compassion. I saw fearful eyes peering from behind the mask of an aging woman, and waves of acceptance for being human brought relief.

Now that the party is over, what stays with me are the few perfect moments in the dance, but even more so the moments of letting go as I watched the video. These days I am much more aware of the mind clutching as I look into the mirror and pore over lines and gray hairs. Sometimes the mind lets go, and sometimes it doesn’t. Now and then Mara, dressed as a slick traveling salesman, knocks on my door and thrusts the latest wrinkle cream in my face. Sometimes I buy, and sometimes I politely say to him, “I’m not interested.” 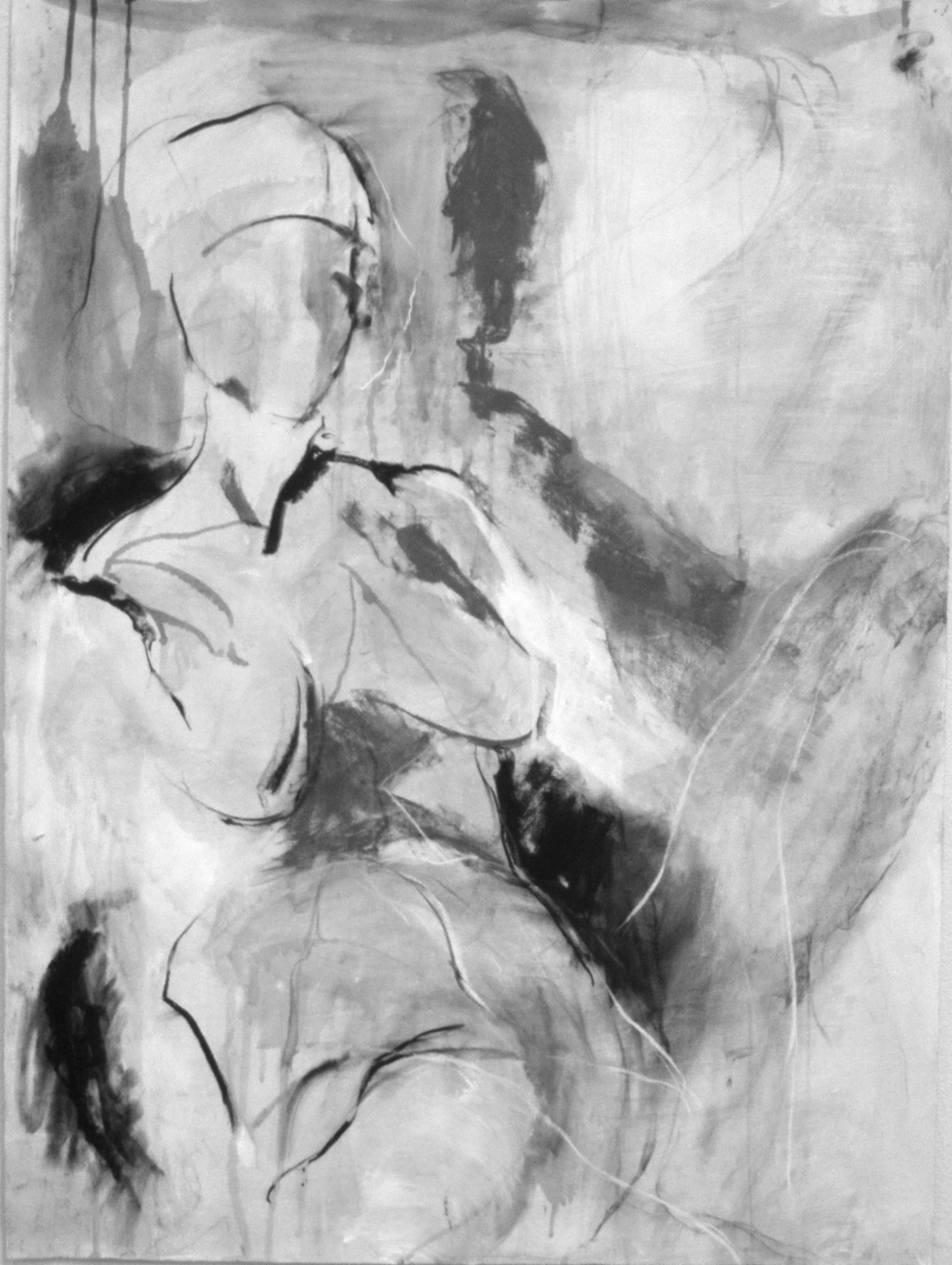