Sister Chân Không, Thich Nhat Hanh’s longtime dharma sister, spoke these eloquent words in an interview following a mindfulness retreat in California in the fall of 1999. The two live with an intimate knowledge of the possibility for peace and of the ways in which violence can obscure that possibility. Their insights—into our interdependence with the cow and the rabbit or the lack of separation between self and society—are grounded by their commitments to the path of social engagement and to ethical precepts, what they call “Mindfulness Trainings.” Thich Nhat Hanh and Sister Chân Không are effective teachers because they not only inspire through such insights but they offer the tools for living by them.

The following article looks at some of these tools as they were presented at the 1999 retreat and interview. The practices are what make the dharma a protector of our souls. As Thich Nhat Hanh puts it, the seeds of anger and violence are in us all. These seeds never go away, but we can choose not to water them or to let others water them. This is the refuge the dharma offers from inner and outer violence.

If one’s house is on fire, one does not search for the arsonist but attempts to put out the fire. The fire is the condition for anger, but we must be responsible for protecting ourselves from our violent reactions to that fire. A deep self-responsibility is required to know that the fire is a secondary cause of anger: It is I who create my moods and reactions, and I need to practice looking deeply in order to identify how I arouse my feelings, perceptions and mental formations.

Mindfulness is the first step. Mindfulness means to be aware of what happens in and around us. It is nonviolent in itself and leads to nonviolence. When we are angry, we can recognize, “I have a lot of anger in me. I am not at peace. I am about to do something that is not very peaceful, not very beautiful. I am about to be violent.”

Calming is the next step, refraining from nourishing the violence further by words, thoughts or deeds. Thich Nhat Hanh invites us to practice in small areas at first. When anger threatens, we may take refuge in breathing for ten to thirty minutes, or in enjoying a mindful activity like doing dishes, watering plants, or walking, to bring mind and body back in harmony. The soul’s refuge is found in the breath, and nonviolence begins there. “Breathing in, I know I am breathing in. Breathing out, I know I am breathing out.” These were the Buddha’s first instructions, the first step to clearing the mind. The practice of stopping and breathing allows us to be as solid as the trunk of a tree so we are not blown hither and thither by the winds at the crown. At the same time, mindful breathing is not repression. It entails respect for one’s feelings, being present to them with compassion, not making them an enemy. Through practice, one can hold anger in mindfulness instead of acting it out. We and those we love are thus protected. Such carefulness then makes love possible.

When Thich Nhat Hanh worked for reconciliation and the end of hostilities in Vietnam, highly critical and jealous articles circulated about him. His reaction at first was to not read them. He thought, “Why should I follow the arsonist? I must take care of my calming.” After practicing mindfulness, he was able to respond from a solid place, a place of compassion. Similarly, Sister Chân Không once gave a deep-relaxation audiotape to a very angry young boy whose family was ready to disown him. He was jubilant as he announced to her later that he had worn out the tape and had discovered an alternative to his violent behavior.

With the collected clarity of mindfulness, we may enter “looking deeply” and the cultivation of insight. The first insight is that of impermanence. We can know that we will not be angry forever, that changing causes and conditions have created our anger and will of necessity change again. Everything is impermanent, including our anger. We can know also that we are more than anger, jealousy and violence, that we are capable of love and understanding.

The second insight is that of emptiness, or knowing that nothing has a separate identity. With this insight, any so-called cause of anger breaks down into complicated, interconnected situations, in turn giving rise to compassion and release from anger. For instance, a retreatant once described to Sister Chân Không the situation of a Vietnamese man who became violent and kicked over the dining room table when his son spilled some soy sauce. Through looking deeply, we can see that the man’s anger blew up like a bomb because of numerous other bombs that had not been defused. His doctor had recently informed the man of a liver ailment. He was having difficulties at work. His son locked himself in his room to listen to loud music that was incomprehensible to his father. His wife told the man that he should not complain so much. She herself often felt neglected. In Vietnam she could have been a pharmacist and lived a fairly comfortable life. As an immigrant in the U.S., she held down five jobs in order to feed her children and send them to schools without gangs.

Such deep looking discloses the interconnected non-anger elements of worry, fear, need and disappointment that compose the man’s anger. Seeing these various empty causes then cuts through the illusion that there is any one person or thing at which to be angry. Instead of a bully, we can see this man as a subject for compassion, a response which may help to diffuse some of his anger. He, too, can use the practice of seeing the sources of his anger—his illness, his work, his family—and thus become more available to himself and better able to look with empathy on the situation of others in his family.

The foundation for this availability to oneself and others is a deep listening. Listening is an integral part of looking deeply. Unlistened-to pain creates violence. When we are listened to, we will bring out the bombs from inside ourselves, uncovering the reality of beauty and goodness inside us, our Buddha nature. Nobody wants to be violent. We are violent because we are unhappy and no one listens to us.

When a boy pickpocketed Sister Chân Không, she inquired into the reasons for the boy’s stealing. She saw herself as this young pickpocket and knew that putting him in jail would never address the extent of his neglect, the depth of his hunger, nor his pain over the fact that his mother might be a prostitute. Through compassionate seeing rather than angry reacting, she could then ask the boy if he’d like something to eat or like to go to school. Listening opens up a view of the oneness of life as we discover that we may not behave so differently from the other were we in his situation. Through awareness of our interconnectedness, we might also avoid becoming pickpockets or committing violence ourselves. Nonviolence is how we can include everyone to be one with us. When no difference exists between me and the other, compassion arises, and violence is impossible. “Hell is where there is no compassion,” Thich Nhat Hanh often says.

Beginning Anew and the Peace Treaty

To address the problems of living in community with monks, nuns and laypeople alike, Thich Nhat Hanh has created processes that provide refuge for individuals threatened by anger and violence. This is the nitty-gritty work in the messy realm of human relationships. One such process is called “Beginning Anew,” a weekly event at Thich Nhat Hanh’s Plum Village community in France. Beginning Anew is a process of becoming available for oneself, for one’s feelings and reactions, and for others. In this practice, individuals, either one-on-one or in small groups, speak from a still composure to someone toward whom they have acted unskillfully or toward whom they harbor anger or resentment. Sister Chân Không explains, “We are all so busy, we have to begin our love anew every week.” We begin by offering appreciation for the other. Then we state a regret: “I regret I did not care for you so much because I was overwhelmed that day.” Third, we describe what someone may have done to make us unhappy, asking what difficulty or problem was behind what she did.

In Beginning Anew, we forgive yesterday and enter today fresh with a heart that is regret-free. This is the other shore. The “Peace Treaty” is a second raft to help carry us across. It is a formal document as well as a practice. As an alternative to attack or reproach, the practice is one of breathing, calming and finding peace in order to approach a person who has been the source of hurt. When we practice the Peace Treaty, we see that our thoughts and feelings are conditioned, that we need not identify with them, and that we can generously reframe the way we see the other in the light of these insights. Indeed, the Peace Treaty opens us to the non-dual reality where self and other share a situation and no one is to blame. To study and practice it is to realize for a moment the joy of touching the ultimate dimension with another human being, of looking undefended from one’s true home at the essential nature of another, and of being seen in return.

Both Beginning Anew and the Peace Treaty allow us to adjust the images stored in our consciousness that then lead to later reactions. Beginning in a quiet place and asking the other to clarify his or her behavior, we can be freed from living in a world of projections. We learn to see, accept and love others for who they are rather than react to images of them we make up in our heads. Instead of harboring anger that blames, we can allow our anger to express itself gently and allow ourselves to become vulnerable out of concern for the other and the relationship. Thich Nhat Hanh says, “Darling, I suffer. Please tell me why you behave so. I am angry. I want you to know it. I need you. I want to understand you. What is going on when you act this way?”

Such practices allow us both to become vulnerable and compassionate. Freed from anger by understanding, we are able to have compassion for ourself, the other, our anger and the long conditioning behind our harmful reactions. Peace, reconciliation and nonviolence are possible between individuals who can take refuge in stopping and calming, looking and listening deeply. These practices bring forth a high form of peace that benefits all beings. 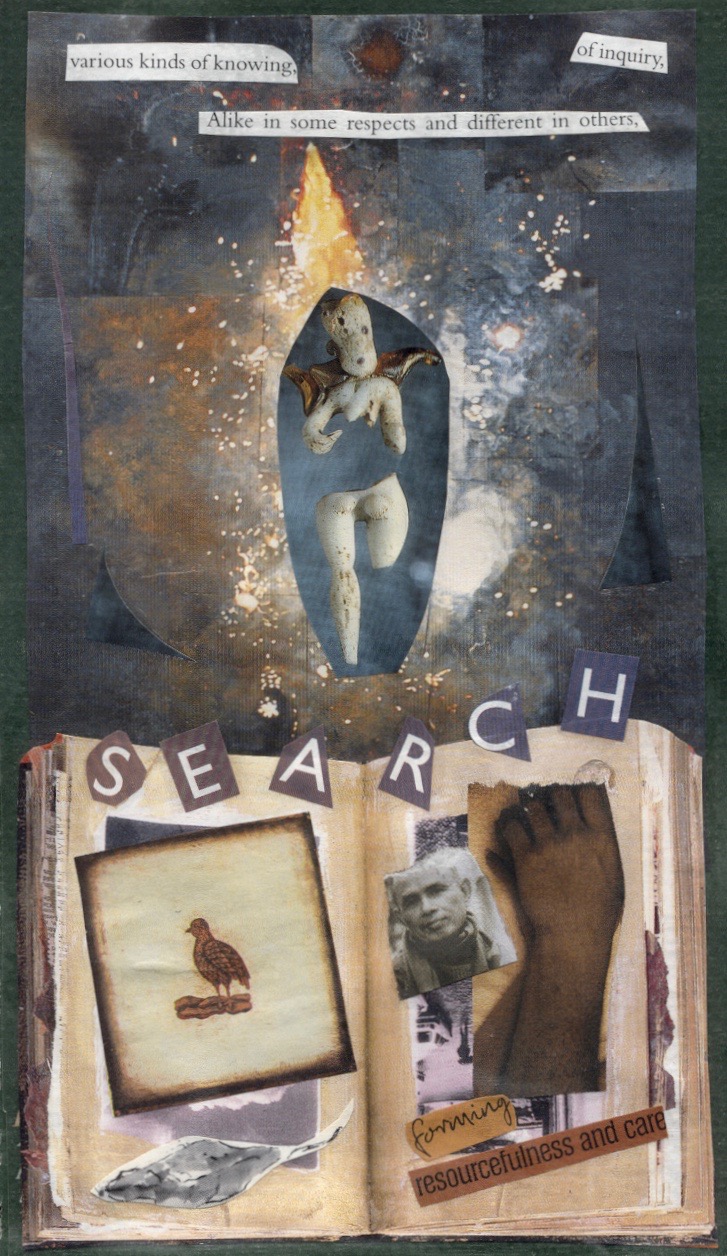 Judith Stronach (1943–2002) was a journalist, poet, arts patron and social activist. A leader in numerous human rights and peace organizations as well as Buddhist groups, she was also a great friend to Inquiring Mind and served as poetry editor for the past few years. She established the Stronach Prize for Poetry at the University of California, Berkeley, awarded annually to an undergraduate student who had surmounted obstacles to return to school. She is greatly missed.

Judith Stronach (1943–2002) was a journalist, poet, arts patron and social activist. A leader in numerous human rights and peace organizations as well as Buddhist groups, she was also a great friend to Inquiring Mind and served as poetry editor for the past few years. She established the Stronach Prize for Poetry at the University of California, Berkeley, awarded annually to an undergraduate student who had surmounted obstacles to return to school. She is greatly missed.