In 1983, vipassana teacher Joseph Goldstein asked Wes Nisker to create a journal that would serve the growing community of insight (vipassana) meditators in the West. Nisker invited Barbara Gates to help. Thus was born Inquiring Mind, a donation-supported, semiannual print journal. Each issue of Inquiring Mind offered a deep exploration of themes important to Westerners interested in the teachings of Buddhadharma.

While Inquiring Mind was born out of the Theravada Buddhist community, readers and contributors included followers of many different Buddhist traditions, and others interested in the philosophy and ideas of Buddhism. The journal became known for its excellent, thought-provoking interviews of Buddhist teachers such as Jack Kornfield, Spring Washam, Tsoknyi Rinpoche and Norman Fischer—as well as for its art, poetry, stories, essays and humor. 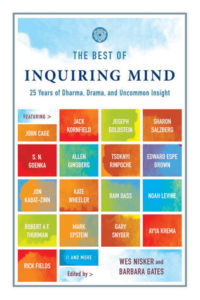 The final issue of Inquiring Mind, “Blowin’ in the Wind,” was published in Spring, 2015. In that issue’s introduction, Inquiring Mind cofounders Nisker and Gates reminisce about the journal’s history and share some favorite memories, while Alan Novidor offers an intimate, behind-the-scenes view in a special Publisher’s Note.

A bequest from the late Buddhist teacher Ruth Denison (founder of Dhamma Dena Desert Vipassana Center and one of the first women to teach vipassana in West) provided the initial funding for this archive—along with generous contributions by an anonymous donor, worldwide meditation centers, and our readers.

If you would like to help us continue developing and maintaining this archive, please donate!

And if you have feedback (or find a typo that needs correction), email archive(at)inquiringmind.com.